The Golden Years of the Shepard Family, September 22

The leaves of memory seemed to make
A mournful rustling in the dark.
~Henry Wadsworth Longfellow

Greetings to all of you from San Diego on this first day of fall, 2010. This is a month to celebrate the Shepard family's move to San Diego, 70 years ago this month.

It was a time of tremendous change for our small family that at the time numbered only 9 people. They had come from Two Buttes, a small town, isolated in the southeast corner of Colorado, and Beaver County, Oklahoma before that. San Diego was a bustling city that must have felt overwhelming to them. Although in 1940 it had just 200,000 people (about 1/7 the size it is today), they still must have felt some culture shock. 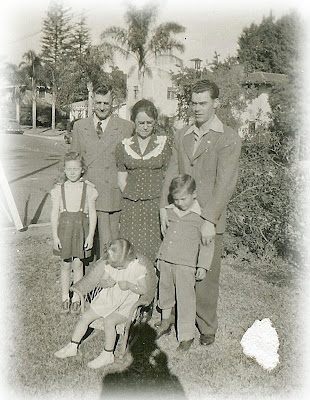 But whatever shock they experienced seems not to have lasted very long. Their move to Southern California began the Golden Years of the Shepard family, a time of prosperity and growth for the families of the four children of William and Bura Shepard. They all settled nicely into life in San Diego, as did most of the other transplants from elsewhere in the U.S. in those post war years. (see the first picture of 6 of the 9 who made the move: Will, Bura, Elmer, Thelma, Bev and Rex, in the glare of the Southern California sunshine, shortly after their move).

In the spirit of the times, Will and Bura had 10 more grandchildren born to them in the "Baby Boom" era (1946 to 1964). For nearly 40 years after their move, they, along with their children and grandchildren, enjoyed the good life in the San Diego area, and maintained a healthy, close knit, extended family life. As I look back in it, I had no idea what a rich experience it was to grow up in the same city with my grandparents, aunts, uncles and all my cousins. 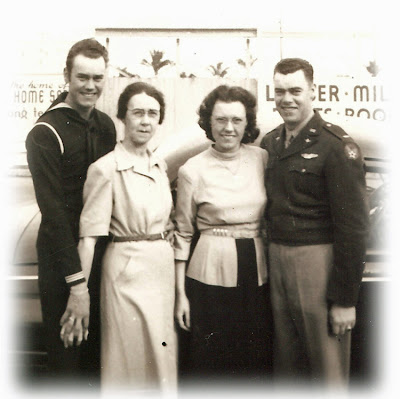 About the time that Will died in 1976 the inevitable scattering began. Since then most of Will and Bura's descen- dants have moved northward to western Washing- ton, Northern California, Nevada and Utah; or eastward to Texas, New Mexico, Oklahoma, Kansas and Missouri. Only a few of their descendants remain in San Diego today: Cindy and I, Darren Boyd and his family, and Jeremy Ortiz and his family.

Only three of those who first moved to San Diego in 1940 are alive today. Elmer Shepard, who now lives in Mustang, Oklahoma near his son Dane, was a 22 year old in 1940 and getting ready to enter the Air Force. Thelma (Shepard) Boyd (Will and Bura's younger daughter) and Rex Russell (Will and Bura's grandson) were both 4 year olds when they made the move. They both grew up in San Diego, but Thelma now lives in Gallup, New Mexico, while Rex lives in Red Rock, Nevada. (Thanks to Elmer and to Thelma for the reflections they gave me on the family move to San Diego so long ago.)

I was the second of the grandchildren born to Will and Bura after the Shepard family migrated to California, and consider myself a beneficiary of that move. Their willingness to uproot their family and respond to the opportunity that presented itself is something worth celebrating. I honor their courage and foresight.
- -
Steve
Posted by Steve Shepard at 9:56 AM