So much of what is best in us
is bound up in our love of family.
~Haniel Long

Greetings to all of you from San Diego as these dog days of summer creep along. 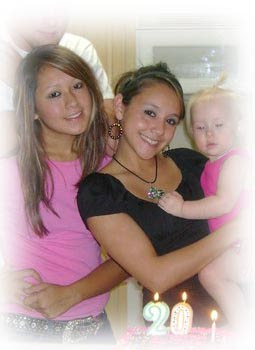 Happy 21st Birthday TODAY to Lyndsey Aquiningoc of Weatherford, Texas. She is the daughter of Kerri Shepard Aquiningoc, also of Weatherford, the granddaughter of Gary Shepard of Oak Harbor, Washington, and the oldest Ggrandchild of Maida Shepard. (See picture of Lyndsey with sister Mandi on the left, and the baby of a friend on the right.)

Lyndsey started a new job a few weeks ago as a dental assistant at a pediatric dental office in Weatherford. She loves to spend time with her sister Mandi, and her friends, and enjoys being a working girl and being single. I hear that she has big plans for her 21st Birthday party and that it should be a fun time.

Alexander and Jane were among the very first of our Davis relatives to settle in Indiana, nearly 2 centuries ago. They were both born in Ohio -- Alexander in 1819 in Belmont County, and Jane in 1823 in Monroe County (just to the south), which is where they were married sometime in the 1840s. Census Records show them still living in Ohio in 1850, but shortly thereafter they trekked almost 400 miles west and settled outside Spencer, Indiana.

A Proud Church Heritage. According to the church records of the New Union Church of Christ outside Spencer, Indiana, Alexander and Jane were among the earliest members of that congregation, which began in the 1850s, as part of the "Stone-Campbell tradition" (aka the Restoration Movement). The New Union Church existed until 1957 when the last remaining members disbanded and joined other churches. Many of them became members of the Spencer Church of Christ, the congregation that today holds the church records for the old New Union Church. I have copies of those church records which show Alexander and Jane Davis on the first official roll of the Church, dated April 3, 1866. Those of us with their church affiliation today can proudly trace our church heritage back 5, 6, even 7 generations!

One of the children of Alexander and Jane Buskirk Davis was Charles Edward Davis (the father of James Brooks Davis). The second child of Alexander and Jane was Elizabeth Davis, who was born back in Ohio in 1844 and made the family trek to Indiana as a 6 year old girl. In 1863 the teenager Elizabeth married a local Spencer boy by the name of Calvin Carter. She and Calvin had two children, but when they were still babies, Elizabeth died at just 23 years old.

Father and Daughter, Side By Side. Her untimely death in 1867 came just one year after the death of her father Alexander. This explains why mother Jane chose to lay daughter Elizabeth to rest next to Alexander. One can only imagine the grief and hardship of the wife and mother Jane burying her 47 year old husband one year and then her 23 year old daughter the next year. At the time, Jane was herself the mother of 8 other children, one of whom was an infant (William Alexander) born earlier that same year! 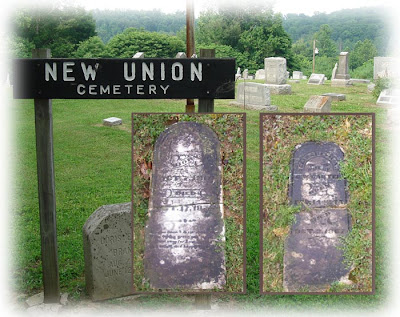 Alexander and Elizabeth -- father and daughter -- still reside in the New Union Cemetery today, side by side. Theirs are among the oldest headstones in the entire grave yard at the corner of Rattlesnake Rd and Shepard Patrick Rd, right next to where the old church once stood. (See above picture) A visit to their burial site is an occasion to feel the weight of our family history and the inspiration of our ancestral memories.

More To Come. I will share more about Alexander and Jane Davis and their daughter Elizabeth in my next blog entry. I will also share an interesting proposal regarding the possible replacement of their broken, weathered headstones. For now, as we extend our birthday wishes to Lyndsey, we honor the lives of these hearty ancestors, whose difficulties seem almost unimaginable, but whose strength and resilience we have to admire.
- - -
Steve
Posted by Steve Shepard at 9:10 AM