Family...
All other pacts of love or fear
derive from it and are modeled upon it.
~Haniel Long

Greetings today from Alameda, California on this weekend of Labor Day.

In my last post I mentioned Alexander and Jane Davis, Ohio immigrants who were among our earliest Davis ancestors to settle in Indiana. I do not have a picture of Alexander and Jane, but I am including a picture that shows their son Charles Edward Davis (with the cane, second from right). Taken in the 1920s this picture also shows Alexander and Jane's Davis grandsons Zaley, Benjamin, Morton, James Brooks and, on the far right, John. 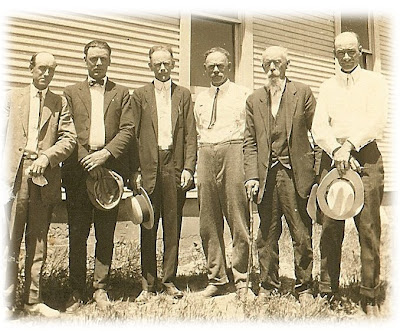 Old and Broken Headstones. If you visit the New Union Cemetery today, you can see the graves of Alexander and Elizabeth Davis -- if you know where to look. Theirs are among the oldest, most weathered headstones in the entire grave yard. When Cindy and I visited the cemetery in July we needed the help of local family member Ruth Fortner to locate them. The two broken headstones are flat, not upright like most of the others around them, and are so old that they are very difficult to read.

Jerry Davis of Grand Prairie, Texas, is a direct descendant of Alexander Davis -- as am I, and many of you. (At least 35 of you who are reading this are also direct descendants.) Jerry wrote me recently with an idea about Alexander Davis and his daughter Elizabeth. He is suggesting we replace both of their broken, nearly unreadable headstones, with a new one.

He has found out that it will cost $958 to obtain a new quality headstone that will honor the memory of these two and be a fitting tribute to them in this cemetery that holds so much history of our family. Jerry has said that he will make a substantial contribution himself toward the cost of this headstone. Cindy and I have agreed to do the same. Are there others among you who can contribute to this cause? 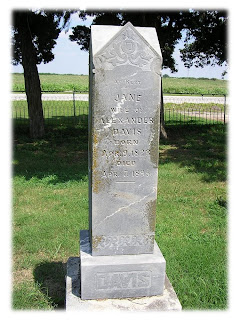 The Rest of the Story. By way of explanation I should mention that Jane Buskirk Davis, Alexander's wife and Elizabeth's mother, is not buried in Indiana. She was among our Davis kinfolk who left Indiana in the 1880s and migrated to Oklahoma. Jane, at 70 years old, with their youngest son William Alexander Davis, "ran for land" in the Cherokee Strip in 1893, staking a claim and settling in what eventually became Helena, in Alfalfa County, Oklahoma.

Jane died just two years later in 1895. Land had been donated for a cemetery but it had not yet been plotted. Even so, they allowed Jane's burial, and she became the first person buried in Good Hope Cemetery just south of Helena. Today she lays to rest there beside her son William Alexander and his wife Mary. (See the second picture of Jane's headstone.)

Jane's headstone in Oklahoma is in very good shape, as you can see from the picture. Back in Indiana, however, her husband's headstone and that of her daughter, are in very poor condition (see my last post for a picture of their headstones).

Can You Help? If you are able to contribute to the effort to buy a new headstone for Alexander Davis and his daughter Elizabeth Davis Carter in Spencer, Indiana, please contact me by email or contact Jerry Davis. We are hoping to get contributions from several of our family for $50 or $100 or whatever you can give. Please let us know if you can help, or if you have any questions. It's the least we can do for these wonderful ancestors to whom we owe so much.
---
Steve

Posted by Steve Shepard at 1:02 PM