In time of test,
family is best.
~Burmese proverb 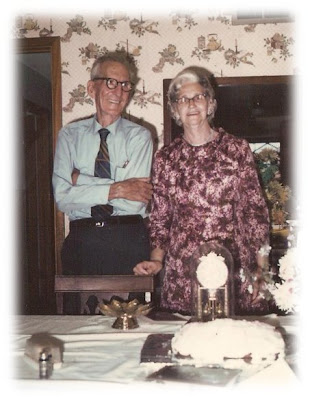 It was 90 years ago today that my grandparents Leroy and Nola Shannon Gower were married in Mountain View, Arkansas. I mentioned in my last post that I do not ever remember them celebrating a wedding anniversary. I do know, however, that they had a special celebration on their 50th anniversary.

It took place on September 27, 1971. A number of pictures were taken that day as the family gathered to honor them at the home of Eugene and Maida Gower Shepard on Armstrong Street in San Diego. The first picture is one of the pictures from that celebration. It shows a smiling Leroy and Nola with their anniversary cake in front of them.

The second picture (below) is also from that day in 1971 and shows Leroy and Nola on the right with their daughter Maida and her husband Eugene in the middle. In front of Eugene is their youngest son Russ; in front of Maida is Leroy and Nola's Ggranddaughter Kerri. On the left is Kerri's parents, my brother Gary with his first wife Jackie. 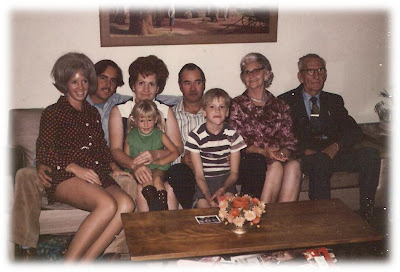 Of the 40 descendants of Leroy and Nola, 21 have been born since 1971. Their youngest Ggrandchild at the time, Tim Gower, missed being born on their anniversary by just 11 days.

Their anniversary September 27th was one of the first happy moments in our family's life after the tragic death just 2 months earlier of their oldest granddaughter, my 20 year old sister Linda. My other sister, 12 year old Barbara, was seriously injured in the same accident, requiring a lengthy recovery. It was a very stressful time for the whole family. 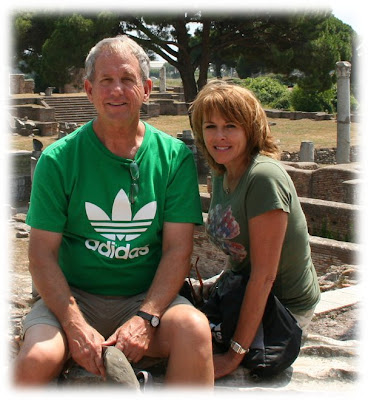 Just a few weeks before their anniversary, Cindy and I had moved from San Diego to Berkeley, California. I had just begun seminary, and Cindy had just begun her career with Wells Fargo Bank, which was why we were unable to attend their celebration. It was one of their last anniversary celebrations; Leroy died in December, 1974. I will always be grateful for these two who were such an important part of our family.

Happy Birthday to Cathrina! Thursday, September 29, is the birthday of Cathrina Helms Clark, wife of Jerry Clark of Lubbock, Texas. The third picture shows Jerry and Cathrina in a picture taken this summer at the Italian ruins of Ostia Antica. Happy Birthday Cathrina!
- - -
Steve

Posted by Steve Shepard at 9:11 AM