Take time to remember,
for the heart holds many treasures,
golden moments that will always be a part of us.
(from Seizing the Treasure)

I have written before in this blog about the long time family connection between the Shepard, Davis and Kilpatrick families. Two of my great aunts, Winona Davis and Myra Davis, married Kilpatrick brothers in Oklahoma back in 1918 and 1924, and began a serious intertwining of our families. It continued when members of those families moved and settled a few years later in Two Buttes, Colorado, and then when some of them even later moved to the West Coast and maintained ties. Over the years the connections between the Kilpatricks, Davises and Shepards have been as convoluted as they have been warm and memorable! 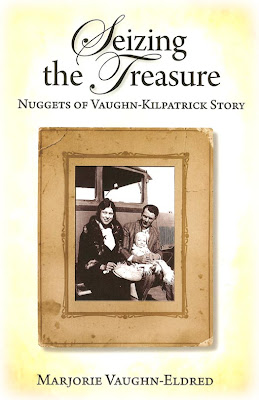 Marjorie Vaughn-Eldred, a reader of this blog who lives in Buckley, Washington, is a member of the Kilpatrick family with whom our family has been in cahoots for several generations now. Marjorie's mother was Marion Kilpatrick, a sister of Bill and Barney Kilpatick, the two fellows who long ago married the Davis girls, who were sisters of my grandmother Bura Davis Shepard. In other words Marjorie is a first cousin of a first cousin of my father Eugene Shepard. See what I mean by convoluted?

A New History Book. Just this year, Marjorie published a family history titled Seizing the Treasure: Nuggets of Vaughn-Kilpatrick Story. This very personal book is a 350 page collection of family stories that take place over the last 100 years. It tells the stories of Marjorie, her parents and grandparents, as well as her siblings, her children and other family. It covers the Kilpatrick family and their moves from Beaver County, Oklahoma to Two Buttes, Colorado, to California, Oregon and Washington. If those moves sound familiar, it's because some of the Shepards and Davises made very similar moves at various times in the 20th century.

Marjorie's book is one more work that will take its place alongside other writings that chronicle the life of our larger family. The strength of her book is the family recollections that recount stories while not being quite so concerned with exact dates and other details. Her work is "an anthology of family tales [that] joins several genres: non-fiction, creative non-fiction, essay, letters, and a bit of poetry." It is a valuable piece of our family history that is worth reading, and for which we can be grateful.

Marjorie told me just yesterday: "People can email me at cemeingv@q.com and request a book or go to Amazon.com and buy a copy there for $16.95. If they buy two copies (buddy system) they can save the postage. The book plus mailing expense is about $20 if they order one copy from me." 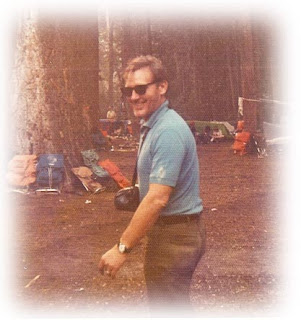 Remembering Edwin Kilpatrick. Reading Marjorie's stories prompted me to remember a first cousin of Marjorie, Edwin Kilpatrick, who is mentioned in her book. Edwin was one of the great influences in my life and illustrates the important relationships between our families over the years.

Many of you remember that Edwin was the minister of my family's church, the Linda Vista Church of Christ, in San Diego in the 1960s. He took a special interest in our church youth group and led us on many wonderful adventures, not the least of which were trips to Yosemite, including my first excursion to the top of Half Dome. (See second picture of Edwin on a youth backpack in Little Yosemite Valley.) He was one of the key factors in my decision to go into the ministry, which resulted in 40 years of full time ministry. He also married Cindy and me 44 years ago, and was a dear friend of ours until his untimely death from cancer just 11 years later. It was my honor to preside at his funeral service in 1979 in Roseville, California. 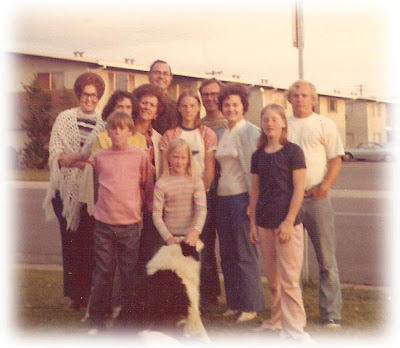 The third picture, from 1972, shows Edwin Kilpatrick, his wife Ruby and 4 of their children in the right half of the picture. In the left half of the picture are my parents Eugene and Maida Shepard with my sister Barbara and my brother Russ. My wife Cindy is on the far left. (Click on the picture for a larger view.)

Thanks to Marjorie for her new book, and for this reminder of the strong and lasting relationship our families have shared.
Posted by Steve Shepard at 1:29 PM