Genealogy:
An account of one's descent from an ancestor
who did not particularly care to trace his own.
-Ambrose Bierce

Greetings to all of you from San Diego, California on what appears (so far) to be a wonderful Friday the 13th. There will be no paraskevidekatriaphobia here. 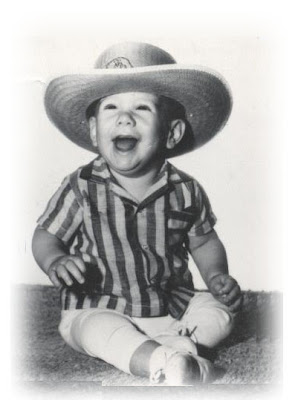 Happy Birthday tomorrow to Eric Russell, who lives with his wife Ruthie in Red Rock, Nevada, outside Reno.

Eric, born in San Diego in 1965, is
I added the word "probably" in the above sentence because that gets us to the level of 4th cousins, and includes such a large number of descendants that I do not know who they all are, much less who is the first born among them all. But I'll bet it's Eric! 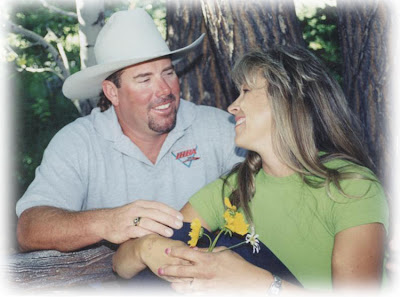 Eric's wife Ruthie wrote me recently: We are doing fine. Hope all is well with you and yours. The weather has been beautiful here in Reno. Should feel guilty, but we don't. We had so much snow and rain last winter that we are loving this mild weather. I am sure it will change soon. Nothing new to report except that Eric will be a year older on Sat. the 14th.

I'm embarrassed to say that [the picture of us] was taken in 2005. Eric is a little thinner and a lot less hair now, but aside of that he looks the same. We are approaching our 19th wedding anniversary this year. Thanks for thinking of us. Best Wishes! 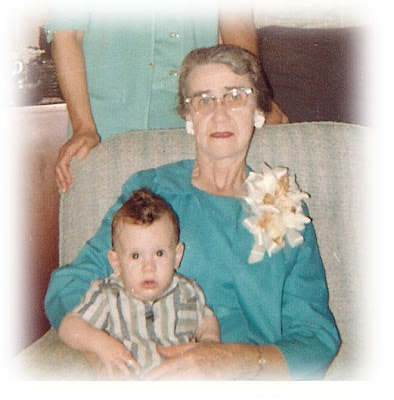 Thanks to Ruthie for sending me the two pictures above. The first one shows Eric when he was a youngster back in 1966. The second picture (referred to in the previous paragraph) shows Eric and Ruthie just a few years ago. The third picture shows a proud and happy Bura Davis Shepard with her first Ggrandchild Eric in 1966.

Special Note Regarding Email Addresses. On a few occasions recently I have had some of you request the email address of a family member. I want to remind you that the emails I send out do not normally show the email addresses of every one on my mailing list. But I am always glad to share an email address with any family member who requests one from me.
- - -
Steve
Posted by Steve Shepard at 10:19 AM