Don't worry that children never listen to you;
worry that they are always watching you.
~Robert Fulghum

10 Years. Today is the 10th wedding anniversary of Jeremy and Desiree Ortiz of Blue Springs, Missouri. Jeremy is one of the Ggrandchildren of Will and Bura Shepard. He and Desiree's new twin boys --  Isaac and Dominic -- were born April 23 and are the youngest of the 13 GGgrandchildren of Will and Bura Shepard. They are also the first set of twins among all their descendants. 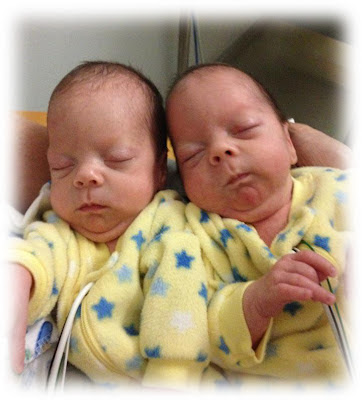 Grandmother Kim reported just yesterday on Facebook: The babies are doing great. Isaac weighs 4 lbs 10 oz and Dominic weighs 5 lbs 1 oz. Dominic is a little bigger and has chubbier cheeks but other than that they are the same. They have been in the NICU over 5 weeks now. Grammy goes every day, now that I can hold them and feed them. What a fun job -- it's so beautiful there. It will be so nice to get them home pretty soon. We were told not to take them to church or other places with a lot of people until the end of summer.

33 Years. Tomorrow, June 2, is the 33rd wedding anniversary of my brother Gary Shepard and his wife Cindy Dillon Shepard. The second picture shows Gary on the left and Cindy on the right, with our father Gene Shepard in the middle. Even though Cindy's sweatshirt says Anacortes, this picture was taken at our vacation home in Arnold, California, Thanksgiving 1990. 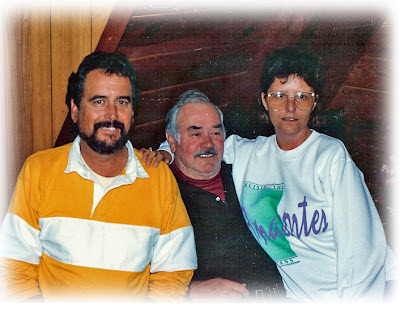 Gary and Cindy had a beautiful garden wedding in our backyard in Los Alamitos, California in 1979, but will celebrate the event tomorrow in Oak Harbor, Washington, where they live. Cindy had much needed surgery on her shoulder about two weeks ago, and is recovering nicely. Happy Anniversary to them!

97 Years. Tomorrow, June 2, we remember the 97th anniversary of the wedding of William Shepard and Bura Davis who were married in Beaver County, Oklahoma in 1915. They were married on the 45th birthday of Bura's father James Brooks Davis (1870-1928).

Will and Bura's wedding 97 years ago was significant because it connected the Shepard and the Davis family lines that have been so important and valuable to our heritage. A key person in that part of our heritage was Bura's father James Brooks Davis, who was born June 2, 1870. He and his wife Callie Spear Davis are noteworthy "transitional people" in our family tree. They uprooted their family of 9 in 1913 and moved 900 miles from Spencer, Indiana, where their families had been settled for several generations, to Beaver County, Oklahoma where some of their extended family still live today. 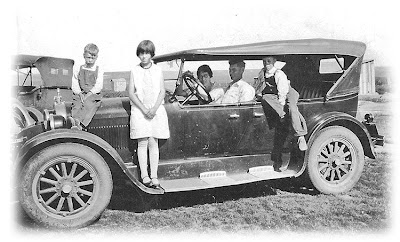 The third picture is one I received earlier this year and shows William and Bura Davis Shepard sitting in a beautiful old car with their three children. From left to right are Eugene on the hood, Pauline on the running board and Elmer sitting behind his father William. This picture was taken about 1926, when the family lived in Beaver County, Oklahoma.

Will and Bura likewise were transitional folks who -- a generation later -- uprooted their family in 1940 and moved them 1,200 miles to San Diego where they settled for the rest of their lives, and where some of their descendants still live today. Will and Bura were the first of the Shepards and the Davises to move to Southern California.
- - -
Steve
Posted by Steve Shepard at 5:01 PM