Our fathers had their dreams;
we have ours;
the generation that follows
will have its own.
~Olive Schreiner


Back in mid-March our grandson Logan spent a week with Cindy and me here in San Diego. My mom Maida and sister Barbara from Washington were also with us as we enjoyed a special week together. One day during that week we decided to make our periodic visit to two places here in San Diego that carry special significance for us: Greenwood Cemetery, and the Hard Rock Cafe, two locations not often coupled in the same sentence, much less in the same afternoon.

At not quite 2 years old, Logan had a difficult time at the Hard Rock. Too confining. Too boring. Way too sedate. But the cemetery was a different story altogether. You need to understand that Logan has never met a grass field he didn't like. Turn him loose on the open green spaces of the neighborhood park and it's a new lease on life for him. His eyes light up, his demeanor changes, he is a new person. 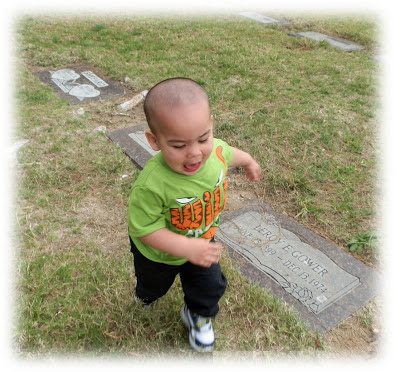 When we got to that solemn corner of the cemetery just off Imperial Avenue, where over a dozen of our dearly departed loved ones reside, Barb and I had a quiet moment of reflection.

Not so for Logan. For him it was an opportunity to tear around the headstones with reckless abandon. He'd been cooped up at the Hard Rock and then in his car seat way too long. It was time to let 'er rip, so off he went. He was like a baseball player who just hit a deep line drive. Run your hardest to one base, then another. And don't stop there. Keep going. The headstones were not solemn markers, they were touchstones for his little body as he scampered from one to another.

The picture above shows him rounding "second base" (Grandpa Gower's grave) and heading for third as fast as his little legs can carry him. Which is not really very fast. For Logan, running is a cross between a waddle and a sprint. But who cares? It's all about the joy, the freedom, the unrestrained explosion of energy. I could imagine Grandpa Gower looking down on his little GG grandson and enjoying this happy graveyard romp with a smile on his face.

With Father's Day coming up this weekend, it is a time to remember fathers and grandfathers who have meant so much to us. I suggest that remembering our fathers need not be so much a solemn and reflective affair. Instead it should prompt us to approach life with all the energy and verve we can muster, like a 2 year old running on grandpa's grave. 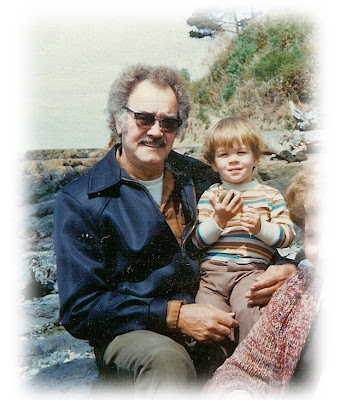 I am grateful for my two wonderful grandfathers, and for my father Eugene Shepard (whose grave can be seen in the upper left of the first picture). In the 10 years since dad died, life has gone on and I sometimes fear that I have forgotten some important things about him. But there is no doubt about my memory of his character, his honesty, his support of me and his love for his family and the church. He was the kind of father who related to me in a way that freed me to be the person I choose to be, and I will always honor him for that.

The second picture shows my dad Eugene Shepard in Anacortes, Washington in 1979. In his lap is his grandson Nathan Shepard, Logan's father. At the time Nathan was 2, the same age that Logan is today.

My uncle Terry Boyd, who passed away in March of this year, is one of the fathers in our family who will be remembered in a special way this weekend. Best wishes to all Terry's immediate family as they celebrate this first Father's Day after his passing.

Select the image above to see a musical photo presentation honoring the fathers in our family who have died, and celebrating those who do such a good job of being good fathers today.

Hmm, an interesting way to use a blog. Nice blog work. I came across your blog while “blog surfing” using the Next Blog button on the Nav Bar located at the top of my blogger.com site. I frequently just travel around looking for other blogs which exist on the Internet, and the various, creative ways in which people express themselves. Thanks for sharing.