The greatest thing you'll ever learn
is just to love and be loved in return.
Eden Ahbez


Happy Anniversary! Congratulations to our son Nathan and his wife Chenda Sou Shepard who celebrated 4 years of marriage this past weekend. They were married on Father's Day, 2009 in a small private ceremony overlooking the Pacific Ocean near the Old Lighthouse in San Diego. Today they live in Alameda, California with their children. 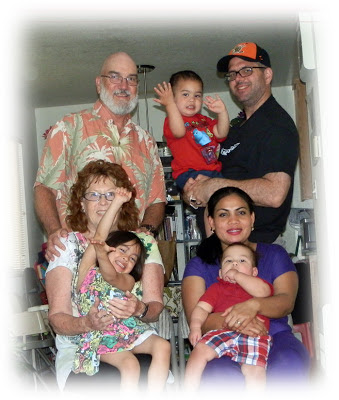 The first picture, taken earlier this month, shows Nathan and Chenda (on the right) with Cindy and me and their three children Logan, Preslea and William.

Grandpa Gower's Birthday. Yesterday was the anniversary of the birth of my grandfather Leroy Ertin Gower, who was born June 25, 1899, in Mountain View, Arkansas. Leroy and my grandmother Nola Shannon Gower were married for 53 years when he died in 1974 in San Diego.


Leroy and Nola are the parents of a family numbering 44 direct descendants, most of whom are still alive today. No wait, that should be 45 descendants, with the birth earlier this month of their first GGG grandchild Kambree Kay Bowman in Weatherford, Texas.

Among Leroy and Nola's surviving descendants are their two daughters: my mother Maida Gower Shepard and my aunt Vicky Gower Johnston, both of whom live in the Puget Sound area of Western Washington. Their son Hank died in 2004.

The second picture shows Leroy Gower as a young man and may have been taken in San Diego in the 1940s, not long after they moved from Oklahoma to the West Coast. My mother thinks this picture might be one taken at the Baptist Church in Balboa Park in San Diego where the Gowers were committed members for many years and where Leroy was a deacon for many of those years. 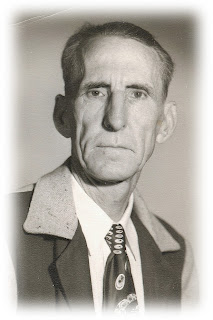 The group picture below was taken at the Shepard home on Armstrong Street in San Diego in 1972. It shows Leroy and Nola Shannon Gower on the far right just 2 years before Leroy died. Also in the picture, left to right, are Jackie and Gary Shepard, Maida and Eugene Shepard, Kerri Shepard in Maida's lap, and Russ Shepard in Eugene's lap.

Thinking about my grandpa Gower causes me to ponder the notion that in some way, my life extends as far back as my grandparents' lives did. I have this sense that, by extension, I have "lived", in some way, ever since the time of their births. Now obviously that is not literally true. But it is true in a psychological sense.

Let me put it this way: I knew very well, and was known very well by, four different grandparents (including my grandpa Gower) whose lives reached back to the late 19th century. I spent time with all four of them, fortunately a good amount of time since we all lived in the same city for the first 20 years of my life. They loved me and I loved them. They rejoiced when I was born (presumably!) and I rejoiced when I could spend an occasional weekend with them. They told me stories of their early lives -- some humorous, some painful, many faith based, and some simply historical. They shared with me who they were in years past. And I took it all in eagerly, like a sponge, like most grandchildren who know and love their grandparents. 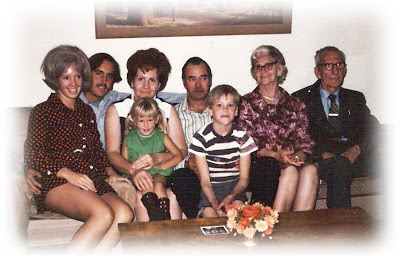 A familial bond was created between my grandparents and me (and to varying degrees with all my siblings and cousins), a bond that was about as strong as one could expect to have. As a result, my personal grasp of history seems to reach all the way back to the years they lived. In the case of my four grandparents, that would be 1903, 1899, 1896, and even 1888, the birth year of my oldest grandparent William Shepard.

So when I consider history or hear about events that took place a hundred years or so ago, what comes to my mind is whether or not it falls within the years since my grandparents were born. If it does, it seems to be more within my grasp, within my extended lifetime, so to speak. Grandpa Gower is one who helps me to have that extended sense of history that reaches back over a hundred years. Next year it will be 40 years since he died, but I remember him well and am grateful for the impact he made on my life. 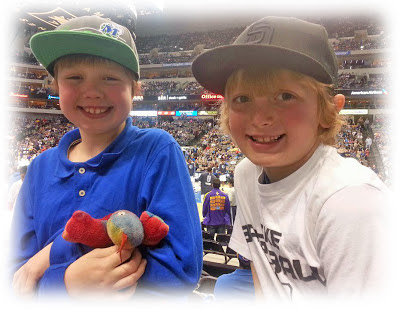 Today is the birthday of Kyle Sauvage, who was born 105 years after his GG Grampa Leroy Gower, almost to the day. Kyle is the younger son of my niece Kelly Shepard Sauvage and her husband James. Until recently, Kyle was the youngest member of our family living in the Weatherford, Texas area. When his cousin Mandi gave birth recently, Kyle got bumped to second place.

This last picture shows Kyle on the right with his brother Nate when they attended an NBA game earlier this year.
- - -
Steve Shepard
Posted by Steve Shepard at 7:59 AM