We are not what has happened in our past,
nor what we have done...
We are who we choose to become... TODAY!
~Timber Hawkeye
(Buddhist Boot Camp)

Greetings to all of you from the home of my niece Kelly and her husband James Sauvage in Weatherford, Texas. My mother Maida Gower Shepard and I are here visiting family we don't get to see too often. 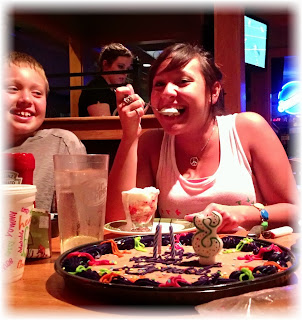 Happy Birthday Lyndsey. We are here in the Lone Star State on the birthday of Lyndsey Aquiningoc, older daughter of Kerri Shepard Aquiningoc, daughter of my brother Gary Shepard. Happy birthday to Lyndsey who turns 23 today! The first picture shows Lyndsey with her cousin Nate Sauvage at Lyndsey's birthday dinner earlier this evening.

Around the year 2000 this part of our family moved here from San Diego, and after a decade of life here, with 3 new births, they seem to be settling in quite nicely. Over 200 years ago our ancestors migrated from the East Coast to the West, ever moving westward and southward. Even though they settled for periods of time in places like Indiana and Oklahoma and Texas, the move westward continued for some of them until they reached San Diego in the mid 20th century.

But now some of us have returned to the area of our 19th century roots here in north Texas and Oklahoma. Even though I sense that there is still some longing for life in Southern California, this move appears to be a permanent one for these family members. At least as permanent as any move can be in these day of easy travel and relocation. 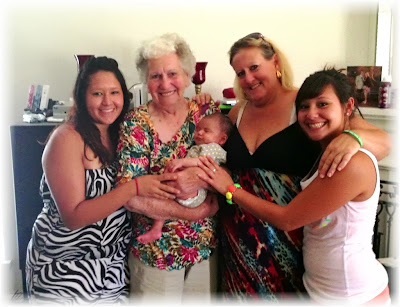 A Great Great. One of the reasons we made this trip was so that my mom Maida could meet her first Great Great Granddaughter Kambree Kay Bowman, daughter of Mandi Aquiningoc and Steven Bowman. The second picture shows the new momma Mandi on the left next to Great Great Grandma Maida Shepard  holding baby Kambree, with grandmother Kerri Shepard Aquiningoc next to them and auntie Lyndsey on the right.

Here is a 12 generation lineage from Kambree to 18th century Irish immigrants Thomas and Eigness Shannon.

On To Arkansas. There is a reason I traced Kambree's roots through her Shannon Irish heritage rather than some other part of her heritage (including her grandfather's Guamanian heritage). This weekend my mom and I will be attending the annual Shannon family reunion in beautiful Mountain View, Arkansas. My next post will include reflections on that event.
- - -
Steve Shepard
Posted by Steve Shepard at 8:13 PM