Your past is just a story.
And once you realize this,
it has no power over you.
~Chuck Palahniuk

What a great experience the last few days have been in the town of Mountain View, Arkansas, where my Shannon and Gower ancestors had strong roots. For the first time my mom Maida and I attended the Shannon Family Reunion, held each year on Labor Day weekend in this historic town in Northern Arkansas. We stayed with mom's cousin Bernice Beckham, whose family graciously welcomed us. 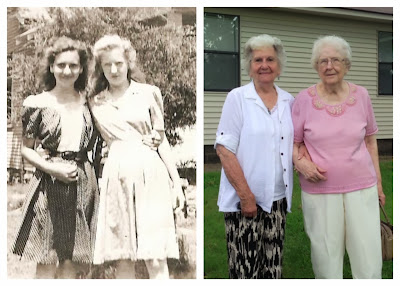 The first picture shows cousins Maida Shepard and Bernice Beckham side by side in Mountain View, the left half taken about 1940, the other half just last weekend.

1,700 miles separate Mountain View from San Diego, and in some ways it feels like a great distance, culturally, linguistically, and socially. But the feeling of family spirit this past week united each of us, whether Shannon kin from right here or from far away.

Mountain View, and Stone County in which it sits, is a beautiful place. I can understand why our Gower and Shannon ancestors settled here in the 19th century. Today the hills of Northern Arkansas are a wonderful vacation destination, and understandably so. Being here makes me appreciate even more the sacrifice and difficulty my grandparents experienced leaving here and settling first in Oklahoma and then in San Diego for the second half of their lives.

Shannon is the maiden name of my grandmother Nola Shannon Gower, who was born in Mountain View, and is where she met and married grandpa Leroy Gower in 1921. It is also where their first two children, Maida and Hank, were born in the early 1920s. Grandma Gower was not at the reunion, of course, having died in 2004. But I could feel her presence as I mingled among her many kinfolk.

Being in Mountain View gave us a chance to visit the final resting place of some of our ancestors, including my Shannon great grandparents Samuel Pickens Shannon (1859-1931) and his wife Finetta Dearien Shannon (1861-1960). Finding Gray Cemetery where they reside was an adventure in itself.

From Mountain View we headed west on AR 66 for a few miles and turned left at Happy Hallow Rd., which after just a few miles turned to dirt. After several more dusty miles we arrived at the Oyd Johnson farm and turned right on Bobcat Trail. In a phone call earlier that day, Mrs Johnson indicated it was the way to the cemetery. "If the sign is still there", she added. 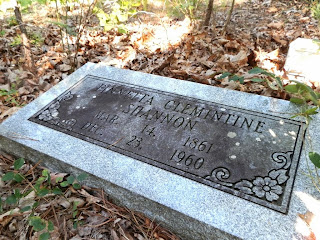 As we slowly crept along Bobcat trail, we sought some sign, any sign, that a cemetery was nearby. But there was nothing. We did see an unlocked gate in the fence on the left so I got out of the car to investigate. Beyond the gate I saw some indication of faint tire tracks, but other than that there was nothing but bushes.

After walking a ways I happen to notice a pile of stones just to my right. Kicking away some overgrown plants I drew closer and looked carefully at what appeared to be a grave surrounded by a small stone wall. To the left of that grave I noticed a flat headstone on the ground. I brushed away some leaves and uncovered a headstone that read "Finnetta Clemintine Shannon", with her dates on it. Her first and middle names were misspelled, but it was definitely her, my great grandmother. (see picture)

Next to her, beneath a badly weathered and barely readable headstone, was her husband of 50 years, the father of her 9 children, Samuel Pickens Shannon, my great grandpa.

The joy of finding these two was tempered a bit by it being such an overgrown graveyard. They both deserve better. One could walk within a few feet of the place and not notice that they were there. As I carefully trudged around some more I counted 34 graves, only 4 of which had readable names on the grave markers. Many of them just had rocks for headstones. Nevertheless, to find Sam and Finetta was special.

We drove the dusty road back to Mountain View with the sense that we had accomplished something important. The picture of our family's history was a little more complete.