Even the smallest act of service,
the simplest act of kindness,
is a way to honor those we lost,
a way to reclaim that spirit of unity
that followed 9-11.
~President Obama

Hello family and friends. Greetings to all of you from Alameda, California on this day after 9-11.

Happy Birthday to Kelly Shepard Sauvage whose special day is today! My niece Kelly is originally from San Diego, but has lived with her family in Weatherford, Texas since 2000. She and husband James stay busy with their respective jobs and the many activities of their two boys Nate and Kyle. 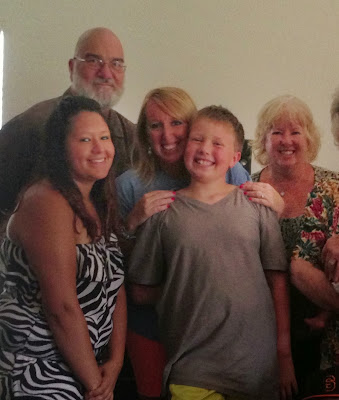 The first picture was taken two weeks ago when a number of our family were gathered together at their home on Del Rio Court in Weatherford. It shows Kelly in the middle sharing a cheeky moment with her older son Nate. Also in the picture are Kelly's mother Jackie Perry on the right of Granbury, Texas, her niece Mandi Aquiningoc of Mineral Wells, Texas on the left, and me in the upper left.

65 And Counting. This past Monday was my 65th Birthday, which, as it turns out, is really not as bad as it sounds. The big day started, unlikely enough, in the tiny little nowhere town of Lee Vining, California, in the Eastern part of California just outside Yosemite National Park. In all honesty, Lee Vining was actually not a bad place to begin the 66th year of my life.

Granddaughter Preslea and I had driven there just the night before from the San Francisco Bay Area. We were there to pick up our son and father Nathan, who had just finished a hike to Tuolumne Meadows in Yosemite. We had to drive the long way around to get to Lee Vining, in order to avoid the massive and historic Rim Fire which continues to char acreage in the mountains of California. 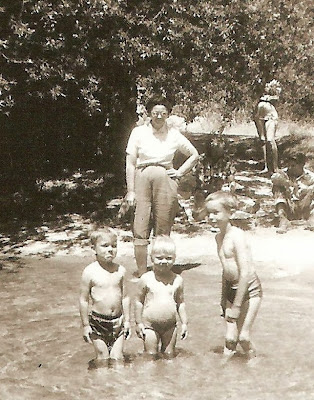 Memories of Yosemite. Being there gave me a chance to ponder the various times my family and I have been in the remarkable California playground of Yosemite over the years, camping in the Valley, day hiking the many trails, backpacking the high country, climbing Half Dome, watching the "fire fall", driving the incredibly scenic roads, and marveling at the amazing beauty of this national treasure.

Among my most memorable moments in Yosemite was the time in 1965 when my sister Linda and I - she was 14 and I was 16 - hiked from the Valley floor to the top of Yosemite Falls with some other teens. We took the strenuous 3.8 mile trail that switch backs to the top just to the west of the falls. Less than half way up she and I left the main trail and cautiously scrambled over some rocks and made our way to the water fall itself. We found a natural cave-like walkway that took us behind the roaring water as it tumbled 2,400 feet into the Valley. I can still remember it was very loud, nearly dark and dangerously wet on the slick granite beneath our feet. We stood there entranced by the rush of the water and the sacredness of that precarious place. After several moments we retraced our steps and caught up to the group heading to the top where the view was awesome. But our time behind the falls was the most profound experience of that day and will remain forever etched in my memory. 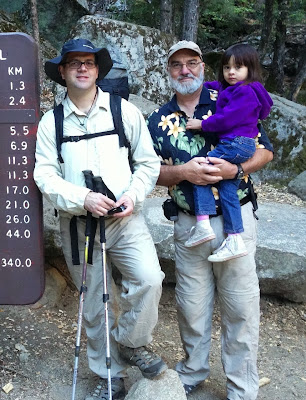 My very first visit to YNP was a dozen years before the water fall experience, when I was just 4 years old. My father, grandfather and other family members went camping in the Valley and hiked the Vernal Falls trail during our time there. My vague recollection of that particular hike came back to me just last Saturday when I hiked that very same trail again 60 years later. This time, however, instead of being WITH my father and grandfather, I WAS the father and grandfather trekking with our son and grandchild. Hiking that trail remains a wonderful experience even today and a thrill to share with family.

The second picture (above) is from that summer of '53 trip to Yosemite and shows my grandmother Nola Shannon Gower standing in the Merced River keeping watch over me (on the left) and my siblings Linda and Gary. Select this link to see a photo presentation of our 1953 trip to Yosemite, which I included in this blog a few years ago.

The third picture shows me, son Nathan and granddaughter Preslea this past Saturday as we began our hike of the Vernal Falls Trail in Yosemite.
- - -
Steve Shepard
Posted by Steve Shepard at 7:32 AM