Family isn’t something that’s supposed to be static, or set.
It’s always evolving, turning into something else.
~Sarah Dessen

I mentioned recently in this blog that a few weeks ago my mom and I visited her birth town, Mountain View, Arkansas. A genealogical trek like that is an opportunity to meet some relatives for the first time, to see where our ancestors once lived, to visit some beautiful towns or cities, and to be graveyard jackrabbits. This particular trip was all of that. And more. 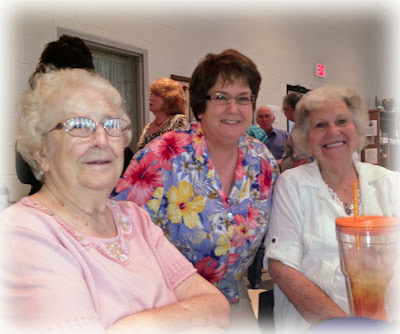 Mountain View, Arkansas. We stayed in Mountain View with mom's first cousin Bernice Beckham. Mom and Bernice are both grandchildren of Sam and Finetta Dearien Shannon, early settlers in Northern Arkansas. While in Mountain View I was fortunate enough to meet several of my second cousins for the first time. One of them was Bernice's daughter Jana Richardson, CFO of a nearby health care facility who was exceptionally hospitable, even for Stone County, Arkansas. (See first picture of Bernice, Jana and Maida at the Shannon Family reunion.)

The Saturday evening of the reunion, Jana took it upon herself to drive us to a beautiful scenic overlook, which on this particular evening provided a remarkable view of the town. Jana made it clear that this was a special place, as she oohed and ahhed, revealing her affection for her hometown, where she has lived her whole life, where her mother has lived her whole life, where my mother was born, and where both my grandparents, Leroy and Nola Shannon Gower, were born and raised. It was a lovely sight as the setting sun allowed its evening glow to give Mountain View its best light.

After basking sufficiently in the view, Jana decided to show us the thing for which her town is most famous: music. Mountain View is known as "The Folk Music Capital of the World". (Google that phrase and Mountain View comes up every time.) Each evening during warm weather crowds of people gather in the middle of town and hear pickers and singers whoop it up and have a good time. (My guitar pickin' brother Darrell would be in "hog-heaven" -- an Arkansas phrase.) That Saturday evening we strolled through at least three different venues where Folk Music was on display to the delight of hundreds of spectators. I couldn't have imagined a better way to experience the heart of this historic town. 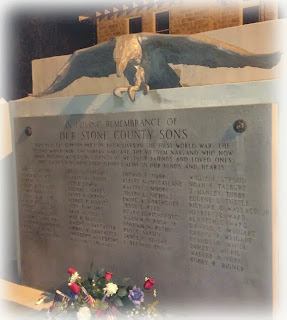 One of the music venues was the steps of the Stone County Courthouse, just a few blocks west of one of only two stoplights in the entire town. We listened for a while to some wonderful, heartfelt folk music, while children danced in front of the singers, putting their best skills on display without a hint of embarrassment. The talent of these young two-steppers made that evening all the more impressive. Clearly Mountain Viewers of all ages take their music seriously. This was small town America at its best.

Gone But Not Forgotten. As we moved along to another music setting we happened to pass by a memorial in front of the Court House that read In Loving Remembrance of Our Stone County Sons. (See second picture.) "I wonder if your uncle is listed here", I asked mom as we walked by. I had learned just a few months ago that Grandpa Gower had a brother, 3 years older than him, who died in World War I in 1918 at just 22 years old. It took but a moment to locate him in the second column of names, the third one down: Lloyd Gower. As that Saturday evening drew to a close, my connection to this small town was growing stonger than I had expected.

A day or two later cousin Jana continued to practice her best Arkansan hospitality -- this time with husband Aubrey, also a Mountain View native -- when they guided us to a couple of the local cemeteries. One was Cooper Hill Cemetery, easily accessible about 9 miles west of town on SR66. It's a beautiful, grassy location, protected by several lazy cows, who lounged just outside the fence surrounding the graves. They stood as mindless sentinels, quietly suspicious of strange visitors like us, as they tail-slapped the flies off their backs, all the while remaining wary of us, as if we were grave robbers or dangerous hunters.

It was at Cooper Hill, under the careful gaze of those mindless sentinels, that we found the grave of WWI soldier Lloyd W. Gower (1896-1918). Although he died 95 years ago this week, his headstone is still fairly easy to read and continues to stand as a solemn reminder that we are descended from brave, sacrificial folk to whom we owe an immeasurable debt.

It's not clear when I will ever return to Mountain View, Arkansas, but the few days we spent there in early September showed us that there is a family presence in that place -- among both the living and the dead -- that will ever be welcoming and hospitable. For countless generations to come, our family history in Stone County will be a touchstone from which to appreciate our proud Gower and Shannon heritage.
- - -
Steve Shepard
Posted by Steve Shepard at 10:39 AM