Something of a Genealogical Quagmire, September 2, 2015

Children are the bridge to heaven.
~ancient Persian Proverb 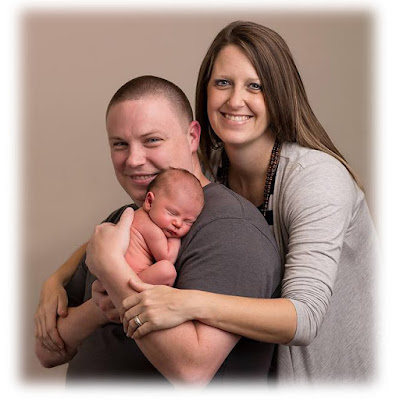 This beautiful picture of Easton with his mom and dad was posted on Facebook recently (photo credit to Natalie Roberson). Many of you have seen it, but I include it here with best wishes to Chris and Amanda!

An Anniversary from LONG Ago. Today, September 2, 2015 is the wedding anniversary of my 6X Great Grandparents Matthew Gillespie and Lucy Pickens. This couple lived so long ago in our family history you may not even recognize their names. Here are some interesting notes about this young couple.

We are related to Lucy and Matthew through Grandmother Nola Shannon Gower, in particular her father Samuel Pickens Shannon. He was given the middle name Pickens because his grandmother's maiden name was Anna Pickens. Giving a child a middle name that is the last name of a Grandmother was not uncommon years ago, and even is done occasionally today.

Lucy Pickens and Matthew Gillespie were both born in Ireland at the turn of the 18th century. We even know that Matthew's birth town was Limerick, Ireland. But they did not marry, and may not have even known each other, until they came across the Atlantic, where their families settled just north of Philadelphia.

Something of a Genealogical Quagmire. In the new world they were part of a large clan of Irish immigrants who tended to marry within the clan. Lucy and Matthew Gillespie's son, Matthew Gillespie Jr., married back into his mother's Pickens family (probably a cousin). Then their granddaughter, Mary Q. Gillespie, also married back into the Pickens family. So if you look at our family tree you see Pickenses all over the place because of the intermarrying. It is something of a genealogical quagmire, which may be a little easier to understand by looking at the lineage at the bottom of this post. 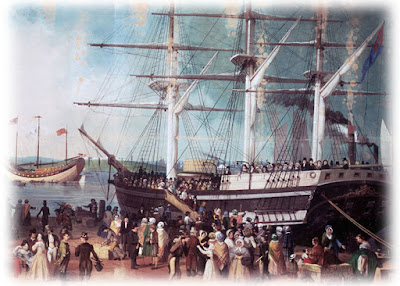 Young Matthew and Lucy married at just 22 and 20 years old. Immigration records show that Matthew arrived from Ireland in 1722 -- the same year they married -- so he was fresh off the boat when he married fellow immigrant Lucy. It is very possible that both their families came over together in the same ship. In a new land, beginning a new family, facing new challenges; it must have been a very exciting, if not bewildering time for Matthew and Lucy to start a new life together.

They were married in Abington, Pennsylvania, in the Abington Presbyterian Church, a congregation near Philadelphia that still exists today (here's their website). They were one of the earliest marriages of this congregation, whose history dates from 1716. The following is an excerpt from the records of the Abington Church, of Matthew and Lucy's marriage on September 2, 1722. Their last names are spelled a little differently, but after nearly 300 years, a little little discrepancy is understandable!

Matthew and Lucy were only married 8 years when Matthew died at just 28 years old. Lucy then outlived him by over 30 years, living to be 60 years old, which was very old by 18th century standards. In the 8 years of their marriage they had 3 sons and a daughter, son Matthew Jr. being the one from whom we are descended. Two years after Matthew died, Lucy remarried a man named John Kerr, and lived the rest of her life with him.

Here then is an 11 generation lineage which shows how we are descended from 6X Great Grandparents Matthew and Lucy Gillespie, whose wedding, long, long ago, we remember today.