You can kiss your family and friends good-bye,
but at the same time you carry them with you
in your heart, your mind, your stomach,
because you do not just live in the world
but a world lives in you.
~Frederich Buechner 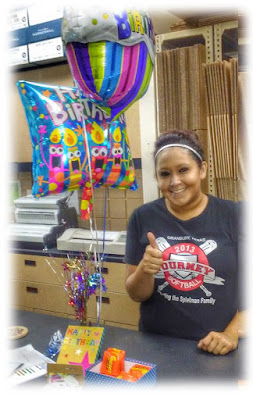 This first picture was taken Friday and shows Mandi celebrating her birthday at her UPS work place. Best wishes to Mandi for a great birthday!

Mandi: Hi, uncle Steve! It's so good to hear from you. I'm doing great! I am still working at UPS and I love it. I am waiting for it to start getting super busy for the holidays I heard it gets crazy busy. Its a great company to work for with such great people and customers. Me and Lyndsey finally got our house together. We can see Granbury Lake from our front door. Kambree going to school and in daycare is probably one of the best things that's happening in our lives these days. I've seen such a huge change in Kambree. She sings her abc's, she can count to 10, and she's been walking around the house with her hand over her heart trying to say the pledge of allegiance. And she loves this country song that I play for her; she can sing every word. Lol! She's such a mini me :) I hope to see y'all real soon!

Mandi's Great Grandmother is Maida Gower Shepard. The family of Maida and the late Eugene Shepard are rooted in San Diego, but in recent years many of them have spread out to other parts of the country. Mandi and her part of the family, including her mother and the other children of my brother Gary, have settled in the area around Weatherford, Texas. They number about a dozen. My mom and a number of others are settled now in Western Washington in the Anacortes and Seattle areas. They number almost 2 dozen. And of course several of us still live in San Diego, but not nearly as many as lived here not too many years ago. 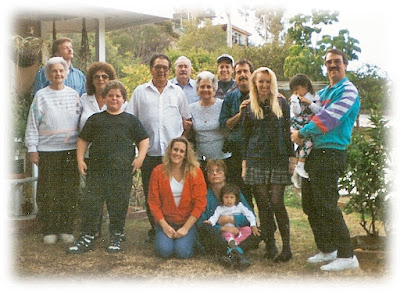 This second picture was taken 21 years ago, in front of Grandma Gower's house on Lynne Street in San Diego. This was the home in East San Diego that was the focal point for many memorable family happenings for the entire second half of the 20th century.

Also in this picture are Nola Gower on the left, with Sean Gower behind her, then Aurora Agnibene Gower with her grandson Thrax and her husband Hank Gower. In the very middle are my parents Gene and Maida Gower Shepard, next to Jason Shepard, Gary Shepard and Kelly Shepard. On the right am I, holding 4 year old Lyndsey Aquiningoc.

When this picture was taken my parents Maida and Gene had already moved to Washington and were back in Southern California for a visit. Within a few years, Grandma Gower, Aurora, Hank and my Dad would pass away, Gary and Cindy would move to Washington, and Kerri, Kelly and Jason would move to Texas.

With all these family movements, and many more, it just goes to show the wisdom of Frederich Buechner's quote at the top of this post. When it comes to family, "You do not just live in the world, but a world lives in you."
- - -
Steve Shepard
Posted by Steve Shepard at 2:27 PM