A person represents each of several of their ancestors
as if there were seven or eight of us
rolled up in each one’s skin —
and they constitute the variety of notes
for that new piece of music which each life is.
~Ralph Waldo Emerson

Hershell Gower. Happy Birthday today to my cousin Hershell Gower. Hershell was born in San Diego, the first of the 12 grandchildren of Leroy and Nola Shannon Gower. He came along just a year or so after his parents Hendrix and Starlene Gower, and his grandparents Leroy and Nola Gower, first moved to San Diego in 1942. Though a native San Diegan, Hershell is retired and lives today with his wife Shelly in Bullhead City, Arizona. His sons are Shaun and Lloyd Gower and still live in the San Diego area. 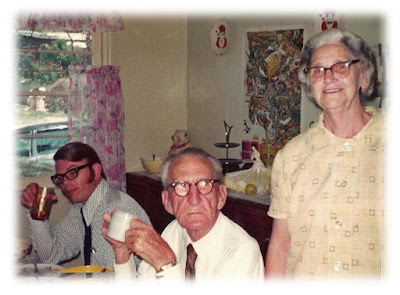 This first picture is from 1972 and shows Hershell on the left with his Grandparents Leroy Gower and Nola Shannon Gower. It was taken in the kitchen of their home on Lynne Street in San Diego where the Gowers lived for nearly 50 years. Grandpa Gower developed very poor eye sight later in his life which helps explain the stern and expressionless look on his face in this picture.

A Long History. The Gower family line is one of the most remarkable in our entire family tree, and can be traced 9 generations before my Grandfather Leroy Gower, all the way back to Abell Gower (1640-1689), of Henrico, Virginia. He is the oldest relative of ours that I can find anywhere, who was born in the new world.

The GGG Grandson of the aforementioned Abell Gower, was his namesake Abel Gower (1796-1870). He and wife Rachel Lay Gower (1800-1860) were Tennesseans who furthered the westward movement of the Gowers by migrating westward within Tennessee and then to Izard County (later to be renamed Stone County), Arkansas just prior to the Civil War. Stone County is, of course, where our Gower relatives lived for several generations before moving to Oklahoma and then California. Stone County, Arkansas is also where some of our Gower kinfolk still live today. 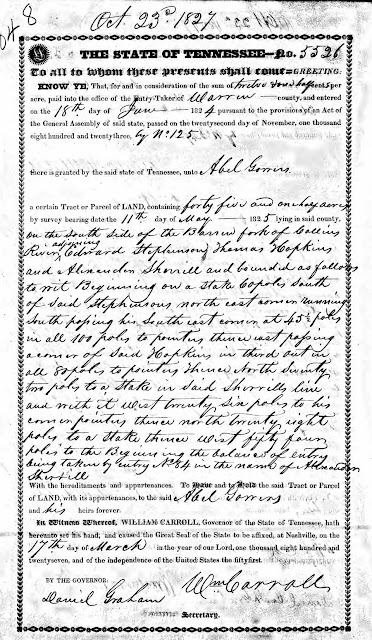 This Sunday is the 200th anniversary of Abel Gower and Rachel Lay Gower, who were married in Roane County, Tennessee on Wednesday, February 21, 1816. The "Early Land Records for North Carolina and Tennessee 1753-1931" show that Abel and Rachel Lay were land owners. In 1827 the young parents Abel and Rebecca Gower purchased 45 1/2 acres of land in Warren County, in Eastern Tennessee. The above image is the record showing the purchase of those 45 1/2 acres in Warren County.

For reasons unknown to us, they didn't do much with that land purchase. By 1830 the Gowers had moved even farther westward, and were settled in Wayne County in Western Tennessee. Eventually they migrated out of Tennessee and into Northern Arkansas.

The marriage of Abel and Rachel witnessed the birth of 8 children between 1819 and 1840. Their 4th child was Jackson William Gower who fought for the south in the Civil War, and survived to live into the 20th Century. He is the one from whom we are descended.

This quick summary is just one slice of the proud heritage of our Gower ancestors, whose history is rich and varied, and as lengthy as America itself.
- - -
Steve Shepard
Posted by Steve Shepard at 12:15 PM