We need to cherish and preserve
the ethnic and cultural diversity
that nourishes and strengthens
this community - and this nation.
~Cesar Chavez

Today is our Granddaughter Preslea's 6th Birthday. Born in San Francisco, she is in Kindergarten in San Diego and enjoying it thoroughly. She lives with her family in the San Carlos neighborhood of San Diego and loves swimming, drawing, monkey bars, school and church friends, Equestria Girls, and slurpies.

Preslea's heritage is an interesting one. She is, of course, one of the Great Great Grandchildren of both William and Bura Davis, as well as Leroy and Nola Shannon Gower, the two couples whose lives and descendants are the usual focus of this blog. 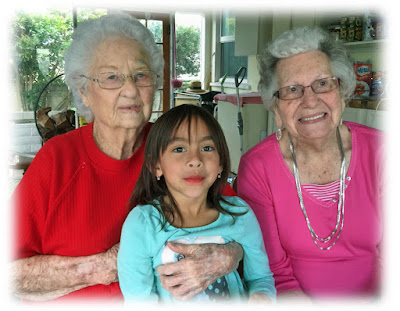 Preslea's heritage also includes Cambodia, the home of her mother Chenda Sou Shepard who came to the U.S. in 2009. Preslea's Cambodian Grandfather was Sou Penh (1945-2014) whose father was Sou Shen, an immigrant to Cambodia from China. In Cambodia her Sou Grandparents suffered through the "Killing Fields" of the ruthless Khmer Rouge Government in the late 20th century.

Preslea's family heritage is amazingly diverse, far beyond the majority of us whose ancestry has been rooted primarily in this county for the last several hundred years. Best wishes to Preslea for a very happy birthday! The following is a slide show that celebrates her 6th Birthday.