Greetings to all on this first week of Spring, 2016!

Birthday Wishes to Gary Shepard. Happy Birthday today to my brother Gary of Oak Harbor, Washington. He is the first of the 6 children who were born to Eugene and Maida Gower Shepard. Gary was born in San Diego the year after his parents were married there in 1945. He is also the first of the grandchildren of William and Bura Shepard to be born in California. 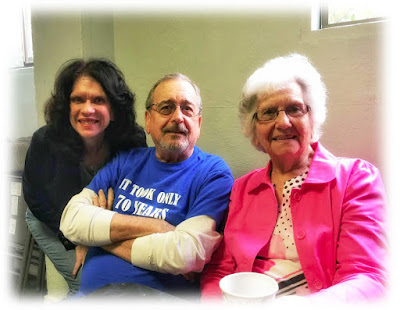 Gary and his wife Cindy enjoy the quiet life in their peaceful forested community just outside the town of Oak Harbor, which is not too far from where our mom Maida Shepard lives in Anacortes, Washington. At least their neighborhood is usually quiet. Last week their property became just a little less forested when a windstorm brought down one of the tall trees around their home. Their house was not hit but both their cars were damaged, Gary's car being a total loss. It was not the kind of birthday present he was looking for!

"It Took Only 70 Years To Get This Good Looking." The first picture was taken last Saturday at the 70th birthday celebration we had for Gary at their church in Anacortes. It was a party that included family, neighbors and church friends. In this picture is Gary flanked by his mom Maida on the right, and his sister Barbara on the left. The second picture was taken 35 years ago today, on March 23, 1981, on the day Gary turned 35 years old. On the left is our grandmother Nola Shannon Gower, in whose San Diego home on Lynne Street this picture was taken. Grandma was not quite 80 years old, and had been a widow for about 3 years. Next to her is Gary alongside his wife Cindy. At this particular time the two of them made their home in San Diego and had not yet celebrated their second wedding anniversary. In Cindy's lap is our young son Nathan Shepard (not to be confused with his second cousin Nathan Shepard pictured below). On the right is me in the big hair, matched by the big glasses.

Birthday wishes to Kaylan Shepard. Congratulations to Kaylan Shepard. Kaylan turned 17 years old this past weekend. She is the younger child of my cousin Dane and his wife Cindy Shepard of Blanchard, Oklahoma. Kaylan is the last of the 21 Great Grandchildren of William and Bura Shepard, and is the final descendant of theirs to be born in the 20th century. Originally from Anaheim, California, Kaylan has lived in Oklahoma now for most of her life. 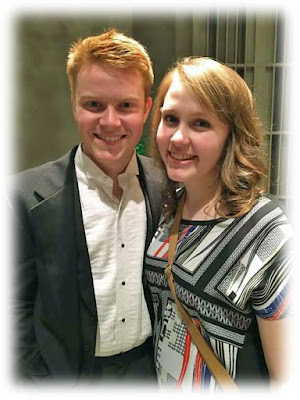 Kaylan: Thank you for wishing me a happy birthday! My junior year has been extremely busy with school, volleyball, art, and college (I am taking a dual enrollment course at a community college nearby). Also, I just recently won first in a volleyball tournament. My birthday this year was the best yet because I had several friends from out of town come and visit. The weekend was a great adventure! Thank you for thinking of me, and I hope you have a wonderful day.

This third image shows Kaylan with her brother Nathan Shepard, in a picture posted on Facebook by their proud mother just last weekend.
- - -
Steve Shepard
Posted by Steve Shepard at 11:42 AM