Grow old along with me!
The best is yet to be,
the last of life,
for which the first was made.
~Robert Browning

In my last post regarding Siblings Day I referred to my mom Maida and her sister Vicki. I said that with combined ages of 173, they were among the oldest siblings we have ever had in our family. I heard from two different people who shared with me some family data that helps to complete that picture.

Two More Senior Siblings of Note. My wife Cindy reminded me that her mom and sister, right here in San Diego, are 92 and 94 years old respectively, and have combined ages of 186. Cindy's mom Paula Harris and Paula's older sibling Juanita Eeds have lived in their house on Burgundy Street for close to 40 years. In 1957 Paula and her late husband Joe Harris first bought that home in the Allied Gardens community of San Diego. Next year Paula will celebrate 60 years living in that location. Congratulations to Paula and Juanita on being such good examples of healthy longevity within our family! 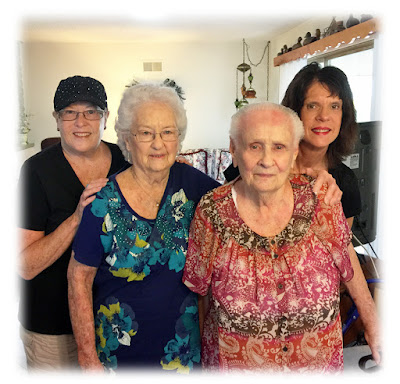 This first picture shows Paula and Juanita last August in San Diego on the occasion of Juanita's 94th birthday. Also in this picture are Cindy on the left and my sister Barbara on the right, who were celebrating Juanita's birthday with her.

I also mentioned in my last post that in February of 1999 my Great Uncle Lawrence was 101 and his sister, my Great Aunt Marjorie was 92. That year their combined ages were 193, which seemed to me the record setter for siblings anywhere in our extended family.

Setting the Sibling Record Straight. After that post I received word from cousin Carolyn Kilpatrick Roberts of Bolivar, Missouri. Her mother was Winona Davis Kilpatrick, sister of my Grandmother Bura Davis Shepard. Carolyn corrected the statement in my last post about Lawrence and Marjorie Davis being the oldest siblings ever in our extended family.

Carolyn: "You cited Aunt Marjorie and Uncle Lawrence but my mother Winona was older than Marjorie and was still living in 1999. She died in February of 1999 at the age of 95 so that, added to uncle Lawrence at 101, is 196 combined years."

So there you have it. 196 years for a single pair of siblings. It happened in 1999 in our family. Can anyone else find any other pair of siblings whose combined ages at any single point in history totaled more than 196? 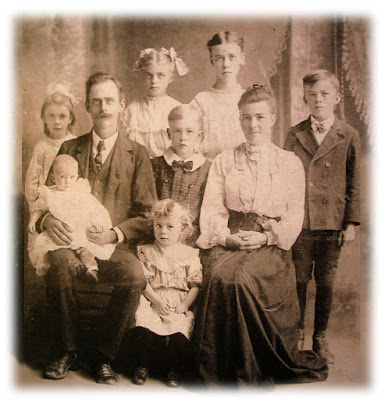 This second picture is one I have not shared in this blog for a couple of years now. It is an absolute classic and one of the most amazing 100+ year old photos in our family history archives. It shows James Brooks Davis, his wife Callie and their 7 children. The children standing across the back are Winona, Myra, Bura and Lawrence. In the very middle is Jesse. The youngest ones in the front are Marjorie and Esther. This picture was taken in 1908 in Spencer, Indiana, 5 years before the family moved to Oklahoma.

A Unique Family. James Brooks Davis and his wife Callie Spear Davis were married in 1896 in Spencer, Indiana. In 1913 they packed up their family and migrated to Beaver County, Oklahoma where some of their descendants live to this day. They were healthy Hoosiers, simple farming folk, heartland Americans, whose simple lifestyle contributed to a wholesome family life. They were "dyed in the wool" Church people who honored family and cared for others. Both the Davis and Spear families from which James and Callie came were "Restoration Movement" Church people who had their roots in early 19th century Ohio.

We have other exemplary family circles among us, but this particular family unit -- all of whom are gone now -- is a special example. It is no wonder that two of their members, Lawrence and Winona, are the senior siblings ever in our family. With people living longer these days, their record will probably be broken one day - maybe in my lifetime. Even so, we will do well to remember with respect and admiration the family of James and Callie Davis.
- - -
Steve Shepard
Posted by Steve Shepard at 2:35 PM