You live as long as you are remembered.
~Russian proverb

If family history is about anything, it is about remembering important people of our past whose influence effects us far beyond their span of years. All three of the primary individuals featured in this post are people who even today have a significant impact on my life. This post also continues my April theme of siblings, by picturing three more sets of siblings in our family.

Eugene Shepard (1921-2003). 95 years ago today my father Eugene Shepard was born in the small town of Logan, in Beaver county, in Oklahoma's panhandle. He died 13 years ago in Anacortes, Washington where he lived the last 25 years of his life. He was raised in Oklahoma but came to San Diego with his family during World War II and spent nearly 40 years here before moving to Washington.

One of my favorite pictures of my dad was taken at the La Jolla Children's Pool, on the walkway along the Sea Wall, which was built in 1931. In the picture, taken about 1941, he is with his brother Elmer Shepard. Their parents William and Bura Shepard had moved their family from Oklahoma to Southern California just a year or so earlier.

I happen to be at that same location a few weeks ago with my Grandsons, and took a picture of the two of them. On the left in the composite picture below are brothers Elmer (about 23 years old) and Eugene Shepard (about 20 years old). On the right are brothers William and Logan Shepard, children of Nathan and Chenda Shepard of San Diego. The boys are two of the Great Grandsons of Eugene Shepard. In this picture they are at about the same location on the Sea Wall walkway, which has changed very little over the last 75 years.

Nola Shannon Gower (1903-2004). I am also remembering today the birthday of my grandmother Nola Shannon Gower who died 12 years ago. She was born 113 years ago today outside Mountain View, Arkansas. She and her family spent 17 years in Okemah, Oklahoma before moving to San Diego where she lived most of the rest of her long life.

There will always be a question about the year she was born, whether it was 1902 or 1903. She always believed it was 1903. But during World War II when she went to work in the airplane industry in San Diego a birth certificate was requested from Stone County, Arkansas. They created a birth certificate on the mistaken testimony of her sister, stating she was born in 1902. So for the rest of her life the Government had her birth as April 28, 1902. Her gravestone in San Diego also says 1902. But she was undoubtedly born in 1903. All of the United States Federal Censuses available to us show that she was born in 1903. Even so, when she died in 2004, there is no doubt she was among the oldest members ever of our family, at 101 years old (or 102). 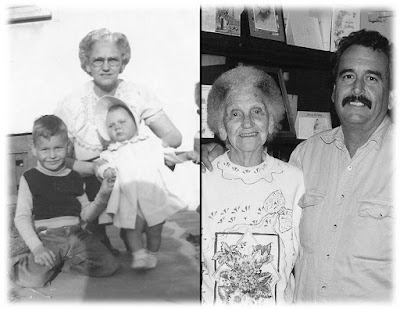 The image above is another composite historical photo. The left hand portion, taken in front of the Shepard home on Ulric Street in San Diego in 1950, shows Nola at 47 with two of the 5 Grandchildren she had at the time, siblings Gary Shepard and Linda Shepard. The right hand portion was also taken in San Diego, at the Gower home on Lynn Street, some 43 years later. It also shows Nola and her Grandson Gary Shepard. 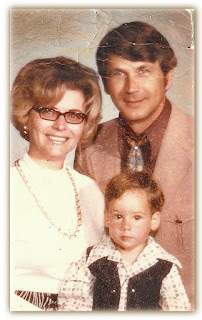 Beverly Jean Russell Wilk (1939-1974). Yesterday would have been the 77th birthday of my cousin Beverly Russell Wilk, had she not died of a brain aneurysm at just 35 years old. At the time of her death in the mid-70s, she and husband Phil Wilk were the parents of two young children, Karl and Shannon. They were living in San Diego, had promising careers and had their whole lives ahead of them. Karl died in 1969, but Shannon and her daughter Emma live today in Atchison, Kansas, near Leavenworth, her late father Phil Wilk's home town.

This third picture was taken in the early 1970s in San Diego and shows the young couple Phil Wilk and Beverly Russell Wilk with their first child Karl.

Our family tree is populated with numerous people whose lives we gladly remember, people who lived in such a way that even today we continue to be inspired by them. These are just a few such individuals.
- - -
Steve Shepard
Posted by Steve Shepard at 1:04 PM