Mother is the name for God
on the lips and hearts of little children.
~William Makepeace Thackeray

Tomorrow is Mother's Day, an occasion to honor all mothers in our family: young, old, those who have gone before us, and those many of us never even knew.

Maida Gower Shepard. I start with my own mom, Maida Shepard for whom I am eternally grateful. At 91 years old, she is a bright and shining star in our family. She will celebrate Mother's Day this weekend with her family in Anacortes, Washington where she lives. 70 years ago this week she enjoyed her first Mother's Day here in San Diego with her husband Eugene and her first son Gary who was just a few weeks old at the time.

Mandi Aquiningoc. The youngest mom in our family is 23 year old Mandi Aquiningoc of Granbury, Texas. She is the proud mama of Kambree Kay Bowman, who is just a few weeks short of 3 years old. 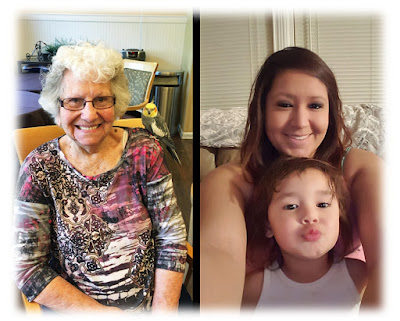 This first picture is a composite of my mom Maida Shepard on the left and her Great Granddaughter Mandi Aquiningoc with her daughter Kambree on the right. Maida's picture was taken by her grandson Patrick when she was spending the day at his Care Facility earlier this week in Edmonds, Washington. Mandi and Kambree's image is from a picture taken earlier this year in Texas.

Thelma Shepard Boyd. One of the senior moms among us is Thelma Shepard Boyd of Blue Springs, Missouri. Originally from Two Buttes, Colorado she was among the first ones in our family to live in San Diego where she grew up. She is the youngest and last remaining child of my grandparents William and Bura Davis Shepard. She is the mother of 2, the Grandmother of 6, and the Great Grandmother of 7. The second picture shows my aunt Thelma with her late husband Terry Boyd, and their two children Kim and Darren. This particular picture is an old one, taken in 1973. 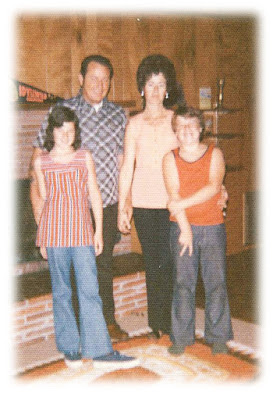 My aunt Thelma also receives special birthday wishes. Next Saturday she reaches that magic milestone of 80. One of her San Diego Granddaughters, Courtney Boyd, has a birthday the same day and will turn 26.

Mary Terry Buskirk. I want to share with you one other deserving mother in our family tree, who most of you probably do not know. But she is a mother of note among our ancestors. Her name is Mary Terry Buskirk. She was originally from Dover, England not far from London but migrated to the United States as a young girl and settled in Monroe County, Ohio. The details of her journey and the route she took to Ohio are unknown to us. We simply know that she and her family were living in Southeast Ohio when she was a teenager. At 14 or 15 years old, young Mary married a neighbor of hers who was at least 12 years her senior, a man by the name of John Foggin Burkirk. Between 1823 and 1843 Mary gave birth to 9 children. It is hard to imagine the difficulty of being not only a new young immigrant but also a young mother on the American frontier in the early 19th century.

She and John's first child was Jane Burkirk who later married a local Ohioan by the name of Alexander Davis. The two of them became the first of our Davis relatives to leave Ohio and settle near Spencer, Indiana about 1850. Indiana is where the Davises lived for several generations before moving on to Oklahoma after the turn of the 20th century and eventually on to California in the 1940s.

Here is Mary and John and some of their descendants: 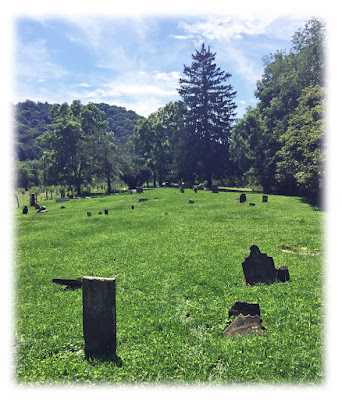 Though a number of her children were part of America's westward movement, Mary Terry Buskirk lived out her days in Monroe County, Ohio. A number of the Terrys and Buskirks are buried in Rutter Cemetery which is down Sunfish Creek from the community of Adams where they lived. (See picture of Rutter Cemetery.) That cemetery is where I discovered a number of our Terry and Buskirk relatives last summer when Cindy and I visited there.

Though none of us ever knew Mary Terry Buskirk, we do know something of her life, and can be thankful for her being a hard working mother whose lot in life was difficult. From she and John we are descended and we gratefully acknowledge their hardships and remember her as a mother of note on this weekend of Mother's Day.

In the midst of all the Mother's Day Celebrations around our family this Sunday, best wishes to all the moms!
- - -
Steve Shepard
Posted by Steve Shepard at 9:11 PM

Hello - I am working on geneology from my own family and googled Mary Terry Buskirk and found your blog about her. I was told by some of my older relatives that Mary Terry Buskirk was kidnapped from England and brought to America by a sea captain for marriage but she hid and married John Buskirk! Thought you might like to know that. I have no evidence other than my older relatives somehow knew this story.
Also, they said her dad's name was George Terry and mom Elizabeth.