There is still no cure for the common birthday.
~John Glenn 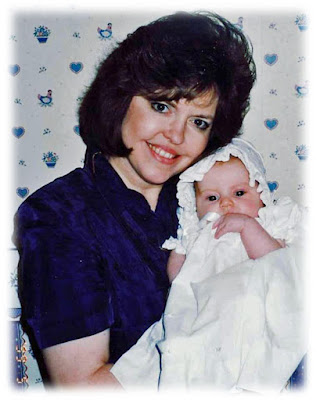 Best wishes and happy birthday to several members of our family who are celebrating birthdays this week.  There is no other time during the entire year when more birthdays in our family are bunched together than in these next several days.

Cindy Saunders Shepard of Blanchard, Oklahoma was born on this day in 1956. She is the wife of my cousin Dane Shepard and the mother of Nathan Ross Shepard and Kaylan Shepard. Best wishes to Cindy on this very special birthday!

This first picture shows Cindy in 1999 with her and Dane's newborn daughter Kaylan. The teenager Kaylan posted this picture on Instagram last weekend on Mother's Day with the following comments, which are just as appropriate for her mom's birthday today as they were last weekend: 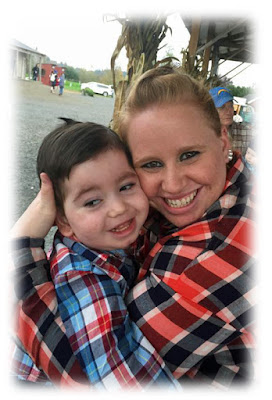 "God has been so good to me. Sometimes, I wonder how I could ever be more blessed than to have a mother as strong, kind, godly, caring, and as special as you, mamma. Thank you for shining God's light in all you do, and thank you for the being my confidant and best friend. You truly are the best mother a girl could ask for. I love you, and happy Mother's Day."

Nicole Haw Shepard of Bothell, Washington was also born on this day, but in 1989. Nicole is the wife of my nephew Patrick Shepard and the mother of two of the youngest members of our family, Logan and Mason.

This second picture was taken last fall and shows Nicole with her older son Logan.

Saturday of this week also marks the birthday of three other people in our family. 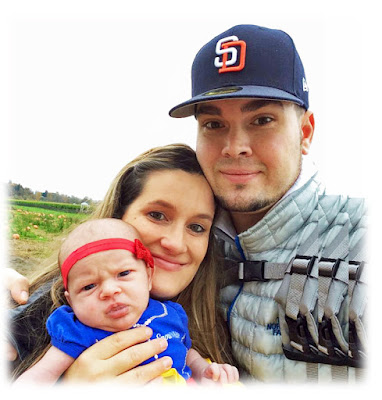 This third picture was taken a few months ago in Seattle and shows Chris and Jessica with baby Finley.

Thelma Shepard Boyd. This Saturday also marks the birthday of my aunt Thelma Shepard Boyd who was born exactly 80 years ago in Two Buttes, Colorado. She lives today in Blue Springs, Missouri, not far from her daughter Kim Boyd Clark and other family.

Thelma is the youngest and last remaining child of my Grandparents William and Bura Davis Shepard. Best wishes to Thelma for reaching this important milestone and for being such an important and respected part of our family. 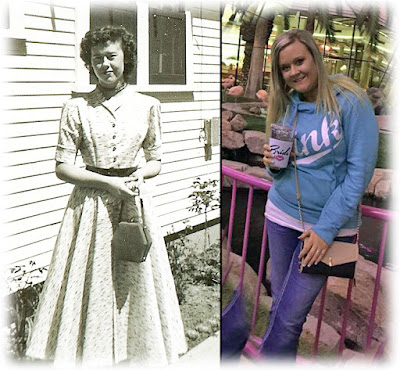 This final picture is a composite image and shows prim and proper Thelma on the left 60 some years ago, and her cool and casual Granddaughter Courtney Slaughter on the right in a recent picture. It is hard to imagine two images that accentuate any more the differences between life in the 1950's and life today. Their hair, their dress, their posture, their looks, and so much more shows how different life was in the mid 20th century from what it is today in the early 21st century. Yet they are granddaughter and grandmother, of the same family and ancestry, born on the same day of the year, 54 years apart. Happy birthday to both of them!

Best wishes to all these folks: Cindy, Nicole, Christopher, Thelma and Courtney. May their birthdays all be happy!
- - -
Steve Shepard
Posted by Steve Shepard at 6:44 PM