Greetings to all of you today from Anacortes, Washington. For most of us, summer is winding down and the events and responsibilities of fall are fast approaching. 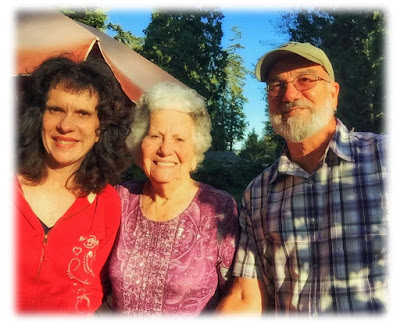 I am in Western Washington this week visiting for a few days with my mom Maida Shepard and family. The Anacortes family continues to adjust to the increasing needs that mom has now that she is approaching her 92nd birthday. Mom is still living in her home on Wildwood Lane just south of town and is doing very well, thanks to her kids and grandkids. Special thanks to her son Gary, her daughter Barbara and her grandson Steve, the latter two of whom live with her and care for her on a daily basis.

The first picture was taken just last night on Mom's front deck as the bright sun of late summer was setting over Puget Sound. It shows Maida Shepard in the middle with daughter Barbara Shepard on the left and me on the right. 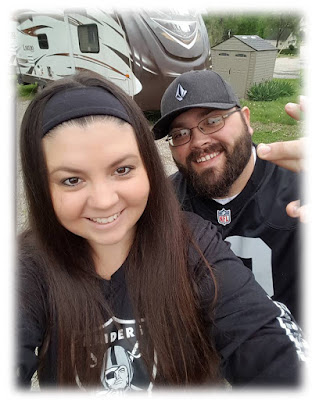 The second picture shows (Raiders fan!?) Amanda with smiling husband Justin in an image from earlier this year.

Lyndsey is the older daughter of Kerri Aquiningoc and is the oldest grandchild of my brother Gary Shepard and Jackie Perry. Lyndsey is also the proud mother of 2 year old Karver Bearden. Best birthday wishes to Lyndsey! 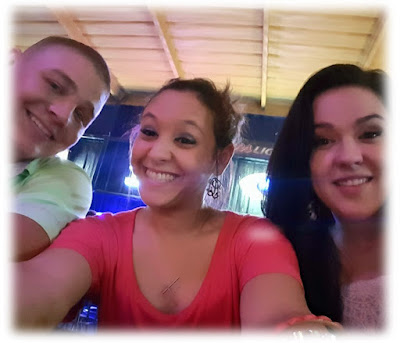 This second picture shows Lyndsey with a couple of her friends, David and Harley, in a photo that was taken earlier this year in Granbury, Texas.

A Sign of the Times. I just noticed that all three pictures included in today's post are selfies. (Yes, even the first one.) I don't think that has ever happened in all the hundreds of posts of The Shepard's Crook. I suppose we can just chalk it up to the nature of picture taking these days. Part of me rues the fact that it often means photos are of lesser quality, though that is not always true. I should, however, be grateful (and I am) that it means there are more family pictures being taken, and being made available. Especially in summer with more daylight hours and happy times that long to be captured.
- - -
Steve Shepard
Posted by Steve Shepard at 9:46 AM