Family life is full of ups and downs,
success and failure
and all kinds of characters...
It's difficult to imagine
anything more nourishing to the soul.
~Thomas More


Happy Birthday Paula. Today is the birthday of my cousin Paula Harrell Tuzzolino. Paula is one of the 12 grandchildren of Leroy and Nola Shannon Gower. She and husband Frank Tuzzolino live in Sun Lakes, Arizona, a suburb of Phoenix. Paula and Frank live just a short ways from her mom Vicki Gower Johnston, who lives in a senior group home in Chandler, Arizona. Paula has spent much of her time this winter in Oak Harbor, Washington where she lived for many years. Best wishes to Paula for a very happy birthday! 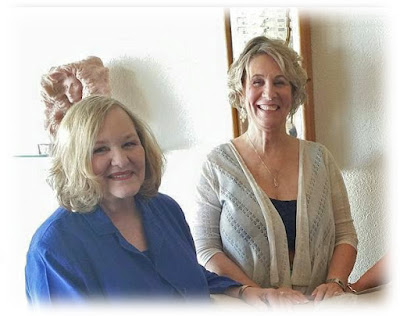 This first family picture was taken just 2 years ago and shows Paula and her sister Gloria Watson in Oak Harbor, Washington at the home of their mother Vicki and her late husband Duke Johnston. This picture is also an opportunity to remember Gloria who passed away just 11 months ago, and whose birthday would be next week, the day before Valentines Day.

Phillip Wilk: 1935-2007. I am also remembering Phil Wilk, who was born 82 years ago this week. He was the parent of two young children in 1974 when his wife, my cousin Beverly Russell Wilk, died unexpectedly in San Diego. It was a tragic death that rocked the Shepard, Russell and Wilk families. Originally from Leavenworth, Kansas, Phil lived over 35 years in San Diego but spent his last years in Atchison, Kansas, which is where his partner Frank, his daughter Shannon, and his granddaughter Emma still live today. Phil died in Kansas 10 years ago.

His daughter Shannon told me a few years ago: "Dad LOVED to cook. Watching the cooking shows, and trying new stuff out on us! That's where I got my love of cooking. I also remember many of his stories. Once his oldest sister Paula was getting ready to go out, when silk stockings were in fashion, the kind with the line down the back of the leg. Due to the silk shortage, she would draw a line down her legs, to look like she was wearing them. Dad  would wait till she got half way done, then jump out and scare her, and she would have to start all over again. He would always laugh when he told that one. He had one of those voices that just drew you in and you would listen, calming in a way." 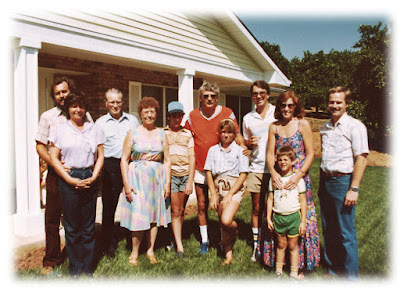 This second family picture was taken in Valley Center (a suburb of San Diego) in 1983, at the home of long time family friends Rod and Violet Ramirez. In the middle in the red shirt is Phil with his children Karl and Shannon in front of him. On the left are Gary and Cindy Shepard, and Bill and Pauline Russell. Cindy and I and Nathan are on the right with my cousin Dane Shepard.

Valentine's Day Pictures, Anyone? Next week I will include a Family Photo presentation for Valentine's Day. Do you have pictures of family members kissing or hugging? I invite you to email them to me so that I can include them in the presentation.
- - -
Steve Shepard
Posted by Steve Shepard at 9:45 AM