You are who you are - not your parents.
~Leslie Burke

William Elmer Shepard (1862-1915). Tomorrow, February 2, will mark the anniversary of the birth of my Great Grandfather William Elmer Shepard. William Elmer is one of the most compelling and fascinating persons in our Shepard family tree. He was born in 1862, the same year his father died in the Civil War. When a teenager he became estranged from his mother and step-father, and set out on his own. He is also the person whose only brother chose to spell his last name "Shepherd".

As a young vagabond in the early 1880s, William Elmer settled in Madison County, Illinois, where he met and married Elvira Owens. With her he made his own family, happier than any family he ever had. They and their 2 children William and Sadie ended up moving to Oklahoma where they lived the rest of their lives. On this 155th anniversary of his birth we celebrate his life and honor his memory.

Sadie and William were the only two children of William Elmer Shepard and Elvira Owens Shepard of Madison County, Illinois. William was born in 1888 in the Mississippi River town of Alton, Illinois, while Sadie was born January 27, 1892 when the family lived a few miles south of Alton in the town of Venice, also in Madison County. 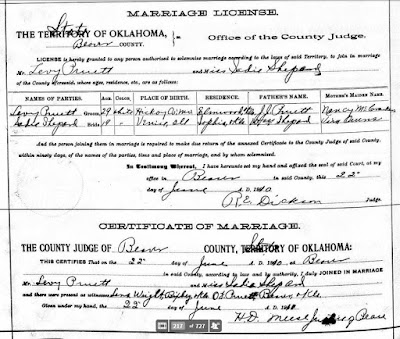 When Sadie was barely a teenager, this small Shepard family of four moved from Illinois to Beaver County in the panhandle of Oklahoma. A few years later young Sadie, who lived in the small farming community of Sophia, met a neighbor who lived in nearby Elmwood, a fellow named Levy Pruett who was 10 years her senior. Sadie and Levy were married in the town of Beaver, Oklahoma on June 22, 1910 and spent 58 years together.

The first image shows a copy of Levy and Sadie's wedding license from 1910. You can click on the image to get a larger view of it.

Sadie and Levy had three daughters, Alberta, Gayle and Twila, who gave them four grandchildren, Norman, Steven, Shawna and Lisa, and then an assortment of Great Grandchildren. Lisa Allred Parks is the granddaughter who contacted me online a few months ago and began a conversation that has connected me to Sadie's descendants like never before. Today Levy and Sadie's descendants live primarily in Oklahoma and North Texas.

Sadie and Levy lived and farmed in Beaver County for many years, although the 1910 US Census indicates that she was a public school teacher at the time she and Levy were married. They made their life in the Oklahoma panhandle, in contrast to Sadie's brother William Shepard who settled in California in 1940. Sadie and Levy did travel to California a number of times to visit brother William and his family. 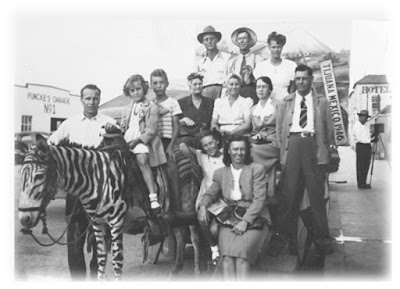 The second image is one I have shared before in this blog. It shows Sadie and Levy Pruett while on a visit to California in 1946. This picture was taken when the family took a day trip across the border to Tijuana, Mexico. In the very middle of this image, in the black dress, is Sadie Shepard Pruett. In back row in the middle is her husband Levy Pruett. On either side of Levy and directly in front of him are 3 other members of the Pruett family visiting from Oklahoma: Glen Barker, Gayle Pruett Barker, and Alberta Pruett Getz. The others pictured here are members of the Russell and Shepard families who were living in San Diego.

Sadie died 2 days after her 88th birthday, in Oklahoma where she had lived for 75 years, ever since she had moved from Illinois as a school girl in about 1905. She and Levy rest alongside other family and friends in Sophia Cemetery, the longtime burial ground in Beaver County located in the community where they spent most of their lives. 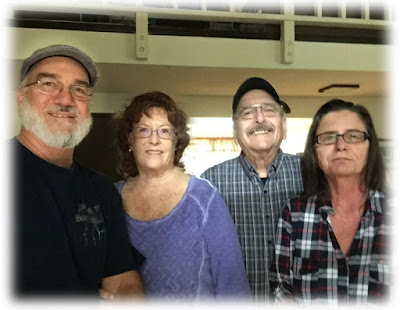 Happy Birthday Cindy Shepard. Tomorrow (Ground Hog Day!) is the birthday of Cindy Ann Shepard, the wife of my brother Gary Shepard. Cindy and Gary live in Oak Harbor, Washington and are among the caregivers for our 92 year old mother Maida Shepard of nearby Anacortes, Washington.