In the middle of difficulty lies opportunity.
~Albert Einstein

Birthday Wishes to Steve and Russ! Happy Birthday this coming Monday to my brother Russell Shepard and his son Steven Paul Shepard who were born on the same day of the year, March 13. Russ turns 55 and Steven turns 27 on Monday. Russ is originally from San Diego, while Steven Paul was born in Anacortes, Washington, which is where they both live today. 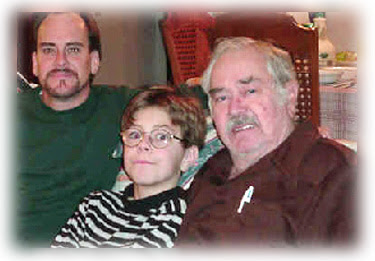 This first picture takes us back a few years. It was taken in the year 2000 and shows my brother Russ on the left next to his son Steven Paul at just 10 years old. On the right is Russ' father Eugene Shepard.

Happy Birthday Jerry! This coming Tuesday, March 14 is the birthday of Jerry Clark. Jerry and his wife Cathrina live in Lubbock, Texas. Jerry has been a part of our Shepard family ever since he and my sister Linda Shepard were married in 1970 when they were students at Lubbock Christian University. 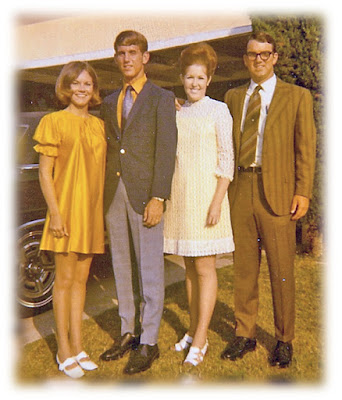 This second picture shows Jerry Clark with Linda on the left in August, 1970 when they were married. On the right is my wife Cindy and me. This picture was taken in San Diego in front of the Shepard family home on Armstrong Street.

An Inheritance Dispute. In my last post I made reference to a family dispute that occurred among our Shepard kinfolk some 140 years ago. Central to that particular crisis was my Great Grandfather William Elmer Shepard. It was that same William Elmer Shepard who is tied to another conflicted time in our family several decades later, a squabble that has some surprisingly similarities to the problems we are encountering today.

When William Elmer died in Oklahoma in 1915 after almost 30 years of marriage, his wife Elvira Owens Shepard (1865-1931) was just 49 years old and still had a lot of living to do. After just 3 years of widowhood, she married Calvin Williams, a handsome young neighbor in their farming community of Logan, Oklahoma. Cal was 17 years younger than Elvira, and just 6 years older than Elvira's SON William Shepard.

Cal's family had come from Missouri around the turn of the 20th century and settled in Beaver County, Oklahoma and the county immediately to the south, Lipscomb County, Texas. Cal was a bit unusual. As a single man he farmed a parcel of land in Logan Township within Beaver County and made a good living for himself. He was a member of the South Flat Church of Christ in nearby Elmwood which was where he met the Shepard family, including Elvira. It was Cal's first marriage, when in 1918 at 37 years old he tied the knot with the widow Elvira, who was a 54 year old grandmother of 4 at the time.

Elvira spent the last 13 years of her life with Cal Williams. She died in 1931 at 66 years old when Cal was just 49. I have always found it a little odd that when Cal buried his wife Elvira he gave her a beautiful headstone, but he misspelled her first name, spelling it Alvira rather than Elvira. Click here to see a picture of her headstone. Interestingly, less than two years after Elvira's death, he married yet another older widow, Francis Pearl Huffman Phinney, and spent the rest of his life with her.

When it came time to settle Elvira's estate there was a question over who should inherit her property, her children William Shepard and Sadie Shepard Pruett who had lived on and worked the farm with their parents for many years, or Cal Williams, who had met and married her later in life. 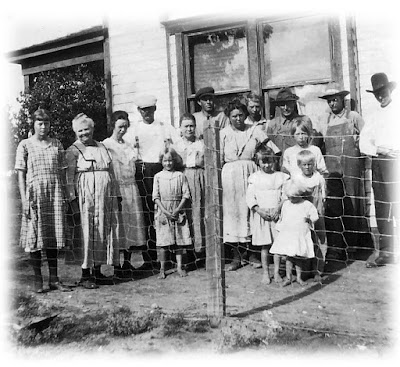 With this post is a picture, taken in Oklahoma in 1930, that shows what appears to be a happy Shepard and Davis family gathering, with the dapper Cal Williams on the far right, and his smiling wife Elvira Owens Shepard Williams the second from the left. Others pictured here include Elvira's son William Shepard, his wife Bura Davis Shepard, and other members of the Davis family.

Within a year or so of this picture being taken, Elvira died and the family splintered over the inheritance issue. It became a contentious and drawn out conflict, which was not settled until 1937, 6 years after Elvira's death, by the Oklahoma Supreme Court. They ended up ruling in favor of her second husband, the dapper Cal Williams. Clearly this did not settle well with her children William Shepard and Sadie Shepard Pruett who had initiated the lawsuit in the first place. (Click here for a website that details that historic case.) To them it must have appeared that Cal Williams took advantage of their older mother Elvira by marrying her simply to get her property.

Some 50 years later, when my dad told me this story, it was still a matter than bothered him and caused him some consternation. It was yet one more family squabble that has been remembered for generations. It reminds us that conflict is nothing new in our family, even if the pain and disappointment seem to be novel and unique. Will we learn from our family's history or keep allowing family squabbles to take their toll?
- - -
Steve Shepard
Posted by Steve Shepard at 11:50 AM