Forget the past;
look forward to the future,
for the best things are yet to come. 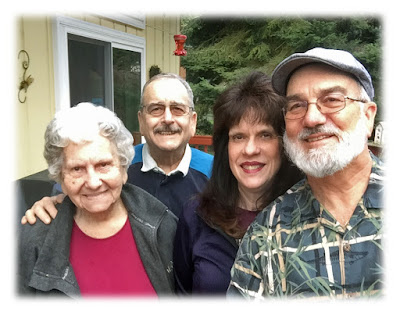 Happy Birthday to my brother Gary Shepard of Oak Harbor, Washington. Born in 1946, Gary is the first of the 6 children of Maida and Eugene Shepard. He was born and raised in San Diego and lived there until 2003 when he and his wife Cindy moved to Western Washington to be near our aging parents. Today Gary and Cindy live in Oak Harbor, Washington. He is one of the primary care givers for our mother Maida Shepard who lives in nearby Anacortes.

The first picture above was taken last week when I was in Washington visiting Mom and our family there. This particular photo was taken on the deck of Mom's house on Wildwood Lane, during a break in the spring rains we were having. Our mother Maida Shepard is on the left with three of her children: Gary, Barbara and me. Gary and Barbara are especially helpful in caring for mom at home these days. 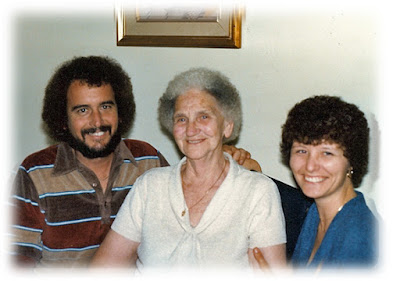 The second picture is an oldie, taken in San Diego in 1980, 27 years ago. It shows Gary on the left, his wife Cindy on the right, and his Grandmother Nola Shannon Gower in the middle. This picture was taken at Grandma Gower's home on Lynne Street in East San Diego. She was 77 years old at the time, just a few years older than Gary is now.