Families are made in the heart.
~C. Joybell C.

Three very memorable celebrations in our family occur this week.

Beverly Russell Wilk. Today, April 27, is the 78th anniversary of the birth of Beverly Russell Wilk, my cousin who died in 1974 of a brain aneurysm at just 35 years old. Born in Two Buttes, Colorado in 1939. Bev was just a year old when her family moved from Colorado to San Diego in 1940. Her parents Bill Russell and Pauline Shepard Russell, and her grandparents William Shepard and Bura Davis Shepard with their children, were the first members of our family to move to San Diego.

Ever since 1940 -- 77 years ago -- some descendants of Will and Bura Shepard have lived in San Diego. As best I can tell, that is longer than any place that our Shepard ancestors have lived. 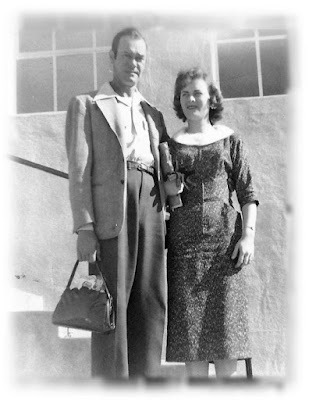 The first picture I am including today shows my dad Gene Shepard with his niece Beverly Russell Wilk in the 1950s, alongside the El Cajon Blvd Church of Christ in San Diego, which was the family's church at the time.

Dad was born in 1921 in rural Logan in Beaver County, Oklahoma, the third of the four children of William Shepard and Bura Davis Shepard. Just before World War II he and his family moved to San Diego, where he lived the longest part of his life, nearly 40 years. In 1978 he and wife Maida retired to Anacortes, Washington where they made their home until his death in 2003.

Gene and his mother-in-law Nola Shannon Gower were born on the same day of the year, 18 years apart. Interestingly, the other birthday person this week, Beverly Russell Wilk, was born 18 years after my dad Eugene, almost to the day. 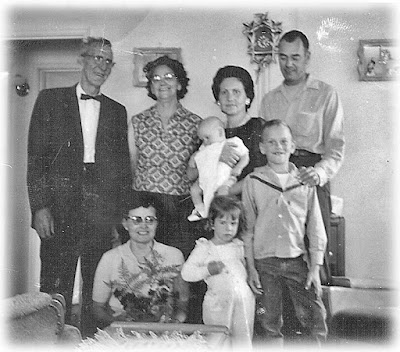 Nola Shannon Gower was born April 28, 1903, the last of the 9 children of Sam and Finetta Shannon. In 1925 she and husband Leroy Gower moved to Okemah, Oklahoma. Then in 1942 they moved with their three children to San Diego, just two years after the Shepards had also moved to San Diego from Oklahoma. It wasn't until the Shepards and the Gowers had settled in California that they met each other. That occurred in 1943 when my mom and dad, Maida Gower and Gene Shepard, met each other and were married in 1945.

The second picture was taken in 1962 at the Gower home on Lynne Street in East San Diego. From left to right are Leroy and Nola Gower, Maida (holding son Russell) and Eugene Shepard. In front is Starlene Gower next to Barbara and Darrell Shepard.

This week of the birthdays of these three -- Beverly Wilk, Gene Shepard, and Nola Gower -- is a time to celebrate three well loved and much respected people in our family tree. I am thankful for the life and family legacy of all three of them.

In a special way, I celebrate my father and my grandmother today in the very place they spent the last years of their lives. At the Shepard home on Wildwood Lane in Anacortes, Washington.
- - -
Steve Shepard
Posted by Steve Shepard at 7:44 PM