Bee to the blossom, moth to the flame;
Each to his passion; what's in a name?
~Helen Hunt Jackson
Happy Birthday to my wife Cindy this past Sunday, January 7. Her birthday occurred in the midst of a time when our family is down with the flu. It is a bug that has hit our entire community very hard - neighborhood, school, church -- and our family has not escaped the ugly symptoms. Unfortunately most of her birthday was spent in bed. Fortunately we are on the mend. Happy Birthday to Cindy! 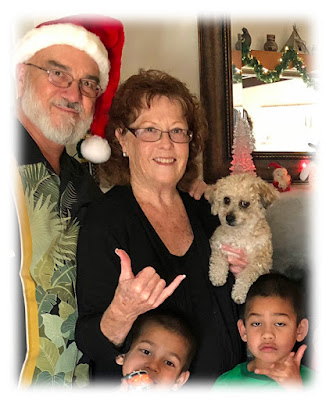 This first picture shows Cindy surrounded by me, grandsons William and Logan, and our dog Jasmine. This picture was taken a few weeks ago on Christmas Day in San Diego.

Happy Birthday today to Mary Shepard, wife of my brother Darrell Shepard. Originally from Chicago, Mary and her family live in Bothell, Washington near Seattle. Mary is the administrator of a senior care facility in nearby Everett, Washington. Besides working hard at her day job, Mary loves spending time with her four Grandchildren, who all live close by.

As far as I know the Civil War Soldier William was the oldest Shepard ancestor that my father and even my grandfather ever knew about. Fortunately we have access to more historical data these days than ever before, hence the recent discovery of family information that was virtually lost to our parents and grandparents.

Fun With Family Names. We have always known that there were several William Shepards in our family history, a tradition that continues today with my Grandson, who was given the name William Shepard (b. 2012). But with the Shepard ancestry discoveries of 2017, I have found that the name William was a favorite of our Shepard family long before the Civil War. The 19th century soldier William Shepard (1835-1862) actually had an uncle whose name was also William Sheppard (1808-1884). (Before the Civil War the most common spelling of our family's name was Sheppard, with two p's.)

The soldier William also had a first cousin with the same name, William Sheppard (1832-1905), who was also born in the Kirkwood Community of Belmont County, Ohio. These two cousins with the name William Sheppard lived in close proximity at birth and were born just 3 years apart. They were both born into the large and prosperous clan of Sheppards who settled in the Kirkwood Township of Belmont County, Ohio in the early 19th century.

Some other names of Sheppard folk in that clan are amazingly similar to names that we Shepards have given our children. Because of these naming similarities, one might think that we were well acquainted with these Ohio Sheppards from the early 19th century. But the fact is we have not known about them until recently.

The father of the aforementioned cousin William Sheppard was Nathan Cross Sheppard (1801-1856), which is interesting because today we have two Nathan Shepards in our family, one of them being our son Nathan William Shepard. The name Nathan Cross Sheppard is eerily similar to Nathan Ross Shepard, the name of the son of my cousins Dane and Cindy Shepard who live in Blanchard, Oklahoma.

There are other familiar names among the family members of my GGG Grand Uncle Nathan Cross Sheppard. Not only did Nathan and his wife Eliza Sheppard have a son named William Sheppard, they also had children named Rachel Sheppard (1843-1856), Mary Sheppard (1845-1905), and even a Findley Sheppard (1829-1899), all of which are names of Shepard family members today.

This second picture shows daughter and mother Rachel and Mary Shepard, two of those who have the same names as family members from two centuries ago. This particular picture was taken a few years ago at the home of Maida Shepard of Anacortes, Washington. 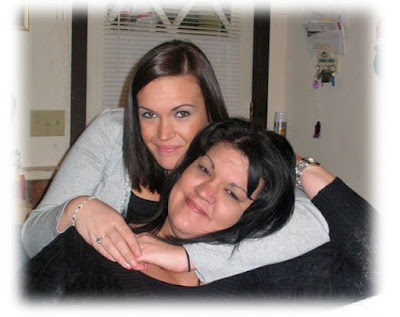 Yet another fun coincidence: The mother of this Ohio Sheppard family was Eliza Sheppard (1804-1894), whose maiden name was Clark, and was originally from Half Moon, New York. Whether she is related to either of the Clarks who find themselves among our kinfolk is unknown. I am referring of course to my late sister's husband Jerry Clark of Lubbock, Texas, and Kim Boyd Clark's husband Jeff Clark of Grain Valley, Missouri. Just when you thought we had plenty of Clarks in our family tree, it turns out we have yet another.

These are just some of the interesting name similarities that I have found in recent months between us in the 21st century and our early 19th century ancestors. We are two centuries removed from them, but the connections are stronger than we might think.
- - -
Steve Shepard