Rejoice with your family in the beautiful land of life!
~Albert Einstein

Greetings to all of you today from beautiful San Diego!

Happy Anniversary to my cousin Kim Boyd Clark and her husband Jeff Clark who are celebrating 11 years of marriage today. Kim tells me that she and husband Jeff will be spending today celebrating in Palm Springs, California. They love retirement and enjoy the opportunity to spend more time with their grandkids. They also enjoy traveling in their RV and plan to spend half their time on the West Coast visiting family ands friends. 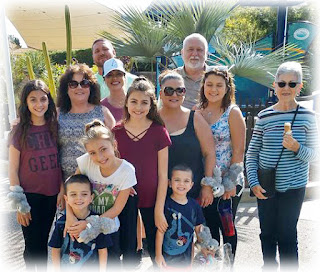 This first picture shows Kim (on the left in sunglasses) and Jeff (in the back on the right) with several family and friends. On the far right is Kim's mother Thelma Shepard Boyd. This picture was taken this past Monday at SeaWorld here in San Diego.

Happy Birthday Dane and Nathan! This Sunday, Jan 21, is the birthday of my cousin Dane Shepard of Blanchard, Oklahoma, and his son Nathan Shepard, a student at Florida College, who was also born on Jan 21. 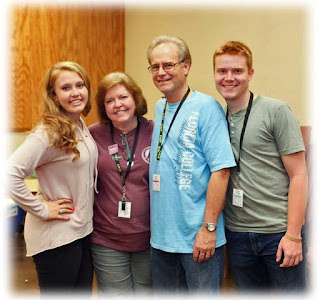 12 Shepard Cousins. Kim Boyd Clark and Dane Shepard are two of 12 cousins who are the grandchildren of William and Bura Davis Shepard. Three of those 12 cousins have passed away: Rex, Beverly and my sister Linda. All 12 of us spent most, if not all, of our growing up years in San Diego during the middle years of the 20th century. That was a wonderful time of growth and togetherness for the Shepard family of William and Bura. Today we cousins are scattered around the U.S., from Washington to California to Oklahoma to Missouri.

In recent months I have shared in this blog about extensive findings related to our Shepard ancestors prior to the Civil War. One interesting conclusion I have drawn from those findings is how important Eastern Ohio was in the history of our family. In particular Belmont and Monroe Counties in Southeast Ohio. Both counties are situated along the Ohio River and are just south of the Cumberland Trail, a famous westward migratory route for frontier Americans in the early 19th century, a route that our Shepard, Davis, Spear and probably other ancestors used in moving westward.

I have known for a long time about the importance of Belmont County Ohio in the history of my Grandmother Bura Davis Shepard's family. More recently I discovered that the family of Callie Spear Davis (my Grandmother's mother), was also from that very same part of Ohio.

But only recently did I find out that our Shepard ancestors were also from Belmont County, Ohio as well. John Sheppard (1737-1827) settled with many family members in the township of Kirkwood, Belmont County, Ohio in the first decade of the 19th century. In 1843 some of these Sheppards migrated to Indiana. Later of course they migrated on to Oklahoma and eventually California.

My grandparents William Shepard and Bura Davis did not even meet until the early 20th century when their families lived in Oklahoma, where Will and Bura were married in 1915.  But as I came to find out, William's grandparents and Bura's grandparents (unknown to each other) had lived in close proximity 75-100 years earlier, in Ohio. For the first half of the 19th century, a large clan of our Sheppard ancestors lived in the area around Sewellsville, Ohio which was just 14 miles from Belmont, Ohio where some of our Davis ancestors were settled, and where Alexander Davis (1819-1866) was born. All of this is remarkable to me since, as far as we know, the Shepards and the Davises never met face to face until Oklahoma in 1913.

It is an interesting and curious fact of our family history. If nothing else this is a reminder than our lives and our families and our history is really more interwoven that we ever thought.
- - -
Steve Shepard
Posted by Steve Shepard at 9:49 AM