Do not fear truth.
I try from the bottom of my heart
to do what truth dictates,
if it leads me to be a Quaker or not.
~ Elizabeth Fry

In my last post I wrote about my 6X Great Grandparents John Wright and Rachel Wells Wright, who are related to me through my Grandmother Bura Davis Shepard. Bura's grandmother was Malinda Wright Davis (1846-1920).  Malinda's GG Grandparents, John and Rachel Wright, were early colonial Quaker pioneers on the East Coast. They met and married about 1737 while their families were living in a Quaker Community near the town of Frederick, Maryland. 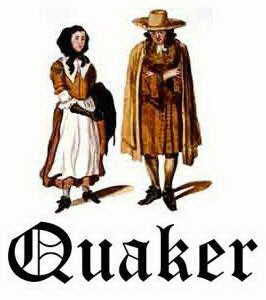 The Pioneering Impulse. In 1749 Rachel and John with their first 7 children relocated from their home in Maryland to the wilderness of North Carolina. Like many Colonialists they were motivated by the pioneering impulse to settle this new land of promise. But the Wrights were equally motivated by the drive to spread the Quaker faith into the wilderness. John and Rachel had been key leaders in their church community (the Fairfax Monthly Meeting) in Maryland, and continued to be among the staunch Quaker faithful as they journeyed onward.

To travel from Maryland into North Carolina in 18th Century Colonial America was a huge undertaking for the Wrights, especially with 7 children between the ages of 5 and 15 years old. The dangers of land travel were many, including poor roads, few bridges, threats of Indian raids and harsh weather. The most common mode of travel in that day was by boat, which may have been how they made their way southward. Traveling by boat would also explain why their first living location in North Carolina was on the Atlantic coast, at a Quaker community at Carver's Creek, north of Wilmington. The historical records of the Carver's Creek Monthly Meeting show that the Wrights were welcomed there in May, 1749. They did not remain at Carver's Creek very long. In 1751 Rachel and John, following the call of the wilderness and the impulse to further the Christian cause, took their family and moved away from the coast and into the untamed Carolina wilderness.

200 Miles On Horseback. They settled in the sparsely populated Cane Creek area. They wrote to the North Carolina Quaker oversight body (a Quarterly Meeting held at Little River) asking for permission to establish a Monthly Meeting in their new location. The Quakers were well organized and required authorization before a new faith community could be established. As was often the case in matters like this, Church bureaucracy moved slowly. (Some things never change!) According to "The Carolina Quaker Experience" (by Seth Hinshaw, 1984) Rachel and new neighbor Abigail Pike became impatient waiting for a response so they traveled the 200 miles to meet in person with the Quarterly Meeting at Little River. Leaving husband John at home with the 7 children, Rachel and friend Abigail and some other friends traveled on horseback all the way to Little River. It is hard to imagine the many dangers they encountered and the physical stamina required to make this long journey. Thankfully it was a successful mission. At their session with the Quarterly Meeting authorization was given and Rachel and Abigail returned to their families. In October 1751 they became charter members of the newly formed Cane Creek Monthly Meeting.

A Driving Spiritual Force. This was one more instance of 6X Great Grandmother Rachel Wells Wright showing her strength of character, her healthy body and spirit, her leadership abilities, her adventurous demeanor, and her persistent Christian faith. The American frontier was the perfect place for strong women like Rachel Wright who worked tirelessly for the betterment of their families and their communities. 18th Century Rachel Wells is yet another woman in our family history who admirably carried the banner of spiritual leadership in her family. Rachel reminds me of my Grandmother Bura Davis Shepard who in the 20th Century was the driving spiritual force in her family. As far as I know my grandmother Bura never knew about her 4X Great Grandmother Rachel Wells Wright. But if she had she would have proudly claimed her as kin.

Rachel and husband John Wright remained for almost 15 years at Cane Creek in what became Orange County, North Carolina. It was during their time there that they added 6 more children to their family, making a total of 13. The first of the Wright children to be born in North Carolina was Sarah Wright (1749-1789), the one from whom we are directly descended. Life was good for the Wrights in the years they were at Cane Creek, at least as good as they could expect being pioneers on the rugged frontier. But as fate would have it they encountered some difficult situations along the way. A serious conflict arose within the Cane Creek Monthly Meeting with Rachel at the center. It was a conflict that altered the course of their lives. That part of the family story I will tell in my next post.
- - -
Steve Shepard
Posted by Steve Shepard at 10:43 AM