The love of family
and the admiration of friends
is much more important
than wealth and privilege.
~Charles Kuralt

In my previous two posts I wrote about my ancestors John and Rachel Wright, pioneers of early America and Quaker Church leaders, first in Maryland, then in North Carolina. After nearly 15 years in North Carolina, John and Rachel Wright were compelled to move to South Carolina. At the time of their decision to move they were the parents of 13 children between the ages of 6 and 26 years old. Part of the reason the Wright family moved was because of a serious conflict that erupted in their Quaker fellowship with Rachel at the center. The dustup turned out to be Rachel's opportunity to show her strength amidst serious adversity.

Pacifism and The Regulator Movement. The conflict had to do with careful adherence to pacifism, one of the key beliefs of the Society of Friends (Quakers). Their members were not allowed to take up arms for any cause. Two years ago I wrote in this blog about another Quaker ancestor unrelated to the Wrights: 5X Great Grandfather Nathan Gatchell (1756-1813). During the Revolutionary War he refused military service as a faithful Quaker. He did however support the war effort by cleaning the guns of the colonists who did fight. But even that activity was too much for his pacifist Quaker fellowship and he was "disowned" by them as a result.

A Church Quarrel and What Resulted is a 1914 article written by Julia White (published by Friends Historical Association) which gives details of this conflict among the Quakers concerning Rachel. She was accused of some improprieties in her work as a Quaker Minister which resulted in the local Quaker congregation (the Monthly Meeting) refusing to authorize her ministry. She and Herman Husband also exchanged some sharp and biting words with each other that Rachel had to apologize for later. It was an apology that some considered disingenuous, which made matters even worse. Her vocal outburst may have contributed to the local congregation's decision against Rachel. She remained adamant however about defending herself and appealed to a higher Quaker council (the Quarterly Meeting) which overturned her congregation's decision. They said it was a poorly made decision and that Rachel should be an authorized minister. Rachel had been vindicated. But the congregation was left in turmoil. One of the angry factions in her local church appealed to the highest Quaker body (the Yearly Meeting) which overturned the decision of the Quarterly Meeting! Rachel was once again un-authorized as a Quaker minister. But after further review, the Yearly Meeting reconsidered and granted Rachel her authorization for ministry in March of 1767. 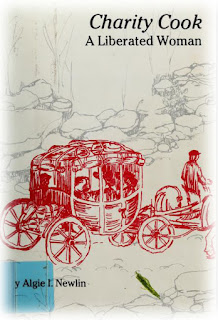 It is interesting to note that the authorization was not just given to her but to her "and her children," according to the 1914 article. Not only was Rachel a Quaker minister, two of her and John's daughters were also Quaker ministers, Charity Wright Cook (1745-1822) and Susannah Wright Hollingsworth (1755-1830). They may have been as influential as Rachel herself. In 1981 Charity's life story was documented in a book titled Charity Cook: A Liberated Woman (by Algie Newlin, published by Friends United Press.

Gritty, Tough and Scrappy. This part of Rachel Wright's story tells us even more about this rugged relative of ours. She was not just a pioneer on the American frontier, not just a devoted wife and mother, and not just a good Quaker. She was all of that but much more. She was a gritty character, a fighter for truth and justice who resisted those who questioned her credibility. She refused to be bullied by powerful men. She was tough and scrappy, able to hold her own against those who opposed her.

We are very fortunate to have such extensive information about Rachel, a colorful ancestor whose life was so compelling and who lived nearly 300 years ago. Fortunately the Quakers were very good at keeping detailed records and for that we can be grateful. Aside from those who died for their country, I can think of no finer hero among all our ancestors than scrappy Rachel Wells Wright.

It was during their difficult time of church turmoil that John and Rachel Wright and their family relocated to a Quaker colony in Newberry, South Carolina, 200 miles south of where they lived in North Carolina. In my next post I will write about the next chapter in the life of Rachel and John.
- - -
Steve Shepard

Posted by Steve Shepard at 9:13 AM