Hello from California where the summer is working its way through a pretty pleasant stage here, especially for this first day of August. We are still mulling over the experience of being together in Washington two weeks ago for the family reunion and hoping that all of us who came from out of state made it home okay, especially Jeff and Kim Clark who drove all the way from Missouri. 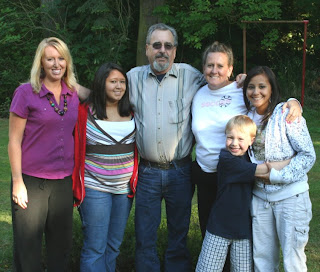 Last week I had no more than made a request for some reunion pictures when here came several pictures by email! Thanks to Jerry Clark for the wonderful photos he took, two of which are attached to this posting.

The first one is a picture of Gary Shepard and his two daughters and 3 of his grandkids. On the left is Gary's youngest Kelly Sauvage. Her son Nate is in front on the right. Next to Kelly is Mandi Aquiningoc whose mom Kerri is in the soccer shirt. On the right is Kerri's older daughter Lyndsey. Everyone in the picture except Gary lives in Weatherford, Texas. Not in the picture are Gary's son Jason Shepard, and his other grandchild Kyle Sauvage, both of who were unable to be at the reunion. 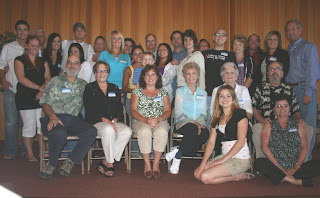 The other picture (click on the picture to enlarge it) shows all 29 of us who attended the family reunion. Shall I try to name them all? Okay here goes... Seated in chairs are me (Steve) and Cindy, Kim Clark (husband Jeff is on the far back left), Vicki Gower, Maida and Gary. Down in front are Linda and Cindy. Back row from left to right are Patrick, Nicole, Jeff, Rachel, Christopher, Amber, Samantha, Kelly, Mary, Lyndsey, Nate, Darrell, Mandi, Nathan, Barbara, Kerri, Steven, Pam, Russ, Cathrina and Jerry. Thanks to Jerry for looking so calm and cool after setting his camera and rushing to get in the picture!

What about next year? Can we plan a date when the family can gather again? I have asked some of you if it would be possible to plan a gathering somewhere in the Texas/New Mexico/Oklahoma/Missouri part of the country. That way those of you who live back there would not have so far to go, and those of us here on the west coast would have the farther distance to travel. Would some of you give it some thought and let us know? I have found that if you can plan something by Christmas it is usually enough time to get the word out.

Do you miss seeing an OLD family picture in these postings? Me, too. Maybe next week.
- - -
Steve
Posted by Steve Shepard at 5:58 PM