Greetings on this Labor Day weekend! I hope all of you are able to be with some family or friends this weekend to celebrate the last holiday weekend of the summer season.

I am including two family pictures. The first is an old one (click on the picture to see a larger view) that Elmer and Thelma (two of the people in the picture) helped me to identify. This is what Thelma Boyd wrote: 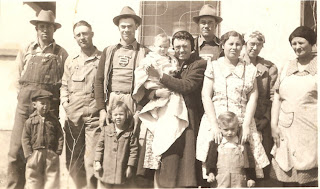 "I just cracked up laughing when I saw this picture. I haven't seen that in forever. It was taken at Aunt Sadie's house in Elmwood, Oklahoma. I don't know the reason we were all there. The people: (from the left) Pat (Elmer) Getz and son Norman (the boy in front). Pat was married to my cousin, Alberta (Aunt Sadie Pruett's oldest daughter). Maybe Sadie is taking the picture. She's not in it. Then Glenn Barker (married to my cousin Gayle, younger daughter of aunt Sadie). Then Elmer with me (in front), Pauline holding Beverly, Eugene, Gayle with Rex (in front), Gram and Aunt Sadie (on the far right). Wasn't I cute? Just kidding, but I do think all of us little ones did look so cute. That made my day. Thank you!!!!!"

The heavy coats but bright sunshine suggest this picture was taken in the fall, maybe around Thanksgiving. Beverly, the baby in the middle, looks to be a few months old and was born in Two Buttes, Colorado in April, 1939. Will and Bura Shepard did not move their family to San Diego until September, 1940, so evidently the family was visiting in Elmwood, (Beaver County) Oklahoma. That's where Will Shepard's sister Sadie and her family lived, and where all of them had lived, until 1928.

Eugene and Elmer have "TB" on their shirts, which stands for Two Buttes, the tiny town in the Southeast corner of Colorado, where the family lived from 1928 to 1940. Eugene graduated from high school there in the spring of 1939 (just a few months before this picture was taken), and Elmer three years before that. Two Buttes was only about 150 miles from Beaver County, so it was not very far and the family went back for visits occasionally (when gas was only about 10 cents a gallon!).

The picture above is actually very good technically, compared to a lot of photos taken that long ago. It does a great job of capturing the mood and the feel of the peop 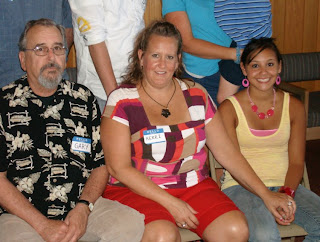 le at that time. The family members have a tough look about them, even with their smiles. It definitely has the feel of a farming group that has seen some difficult times. It is a timely picture for this labor day weekend as it clearly shows that our family was a hard working bunch; even at family gatherings, overalls were common!

Happy 18th Birthday TODAY to Lyndsey Aquiningoc in Weatherford, Texas! She is the daughter of Kerri Aquiningoc,the granddaughter of Gary Shepard, and the oldest great granddaughter of Maida Shepard. The other picture I am sending shows Lyndsey with her mother Kerri and grandfather Gary, taken at the family reunion last month.
- - -
Steve
Posted by Steve Shepard at 1:16 PM