When the star in the sky is gone,
When the Kings and Princes are home,
When the shepherds are back with their flocks,
The work of Christmas begins.
...To make music in the heart.
~Howard Thurman 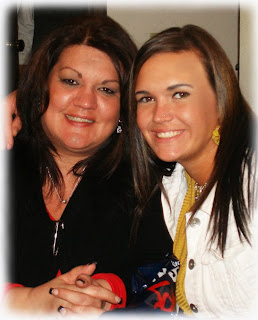 The holidays are now over, the Christmas wrappings have been trashed, travels have concluded, and most of our families are back to some semblance of normalcy. Just a few days ago Cindy and I made our last trip to the airport to get our visiting family members back to their homes. Despite the busy-ness of the season, I hope your celebration was as enjoyable as ours.

This Sunday is the birthday of Mary Ann (Medina) Shepard of Kirkland, Washington. Mary is a part of that very select group of women who are the daughters-in-law of Maida Shepard. Mary's husband is Darrell Shepard, Maida's middle son, and their 3 children are Christopher, Rachel and Patrick. Mary has been a member of our family ever since she and Darrell were married while at Abilene Christian in 1982. A week ago yesterday they celebrated 27 years of marriage. Congratulations and Happy Birthday!

The first picture I am including today was taken recently in Washington and shows Mary with her daughter Rachel. 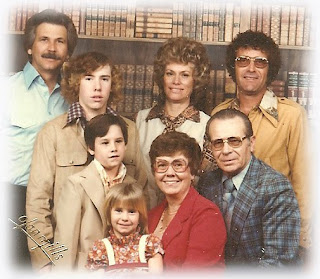 Next Thursday, January 14 is the birthday of Eric Russell of Red Rock, Nevada. Eric is the very first of the 20 Ggrandchildren of Will and Bura Shepard. Happy Birthday to Eric!

The second picture I am including today shows Eric (second from the left) with his family in a picture taken back in 1978. In the picture are Eric's grandparents Bill and Pauline (Shepard) Russell in the front on the right. In the back on the left is Eric's uncle Phil Wilk. On the right in the back is Eric's father Rex Russell with his wife Margie. In front of Eric are his cousins Karl and Shannon Wilk, children of Phil and his late wife Beverly.

I received word this last week that Joan Shepard's daughter Havilah Colgain and her boyfriend Kevin Wardle plan to get married later this month on January 23. The wedding will take place near Price, Utah where they live. Congratulations to them both!

The list of people who are a part of our online family continues to grow. Among the recent additions are: Cheryl and Jim Gower of Fort Mohave, Arizona (first cousins of mine on the Gower side of my family); Nicole Haw of Bothell Washington (Patrick Shepard's significant other); Jeanette Adkins of West Virginia (of the West Virginia Sheppards); and Vicki and Duke Johnston of Oak Harbor, Washington (Vicki is the sister of Maida Shepard).

If you know of others who would like to receive the weekly emails that I send out, please send me their email address.
- - -
Steve

Posted by Steve Shepard at 4:39 AM