Memories Young and Not So Much, Oct 18

I looked up my family tree
and found three dogs using it.
~Rodney Dangerfield

Greetings to all of you from cool and rainy San Diego.

Happy Birthday to Kori Boyd. Today is the 13th birthday of Kori Lynn Boyd, daughter of Darren and Vicki Boyd of Lakeside, California. Kori is the granddaughter of Terry and Thelma (Shepard) Boyd and one of the Ggrandchildren of Will and Bura Shepard. 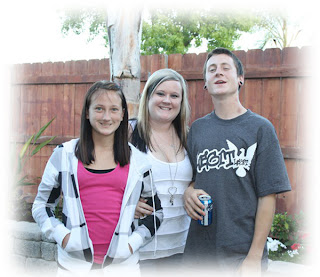 The first picture I am including today shows Kori on the left in a pink shirt, with her sister Courtney and her brother Brandyn. Happy 13th to Kori!

Remembering Uncle Bill. Today I am remembering my uncle Willie Davis Russell, who was also born on this day, but 102 years ago, in Gage, Oklahoma. He was the first son-in-law of Will and Bura Shepard. Uncle Bill married my aunt Pauline Shepard in 1935 and was among those family members who migrated from Colorado to San Diego in the early 1940s. The San Diego area is where Bill lived until he died in 1997. His and Pauline's children Rex and Beverly were pictured at the top of the cousin collage I included in my last post. Their two living grandchildren are Eric Russell of Red Rock, Nevada, and Shannon Wilk of Atchison, Kansas. 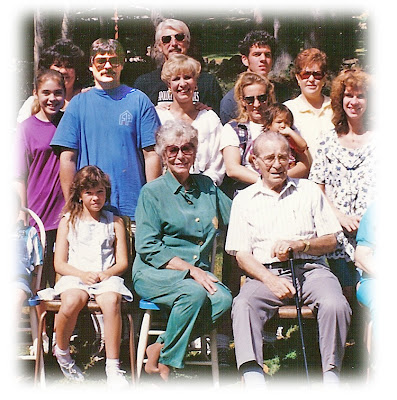 The second picture I am including today shows uncle Bill sitting on the lower right. This picture was taken at a family reunion in Anacortes, Washington in 1994.

Happy Birthday Vicki. Also in this same picture is my aunt Vicki (Gower) Johnston (seated in the middle in green). Her birthday is also today. Standing behind Vicki is her daughter Paula Tuzzolino (whose birthday is NOT today).

Vicki is the youngest child of Leroy and Nola Gower, and was born in Rock, Oklahoma. Vicki spent much of her growing up years in San Diego, but for over 30 years now has made her home in Oak Harbor, Washington, where she lives with her husband Duke Johnston. Happy Birthday to Vicki!

Yet another birthday person in this same picture is Art Colgain, whose birthday was yesterday. He is pictured in the blue shirt on the left. Art, who lives in the Salt Lake City area, is the father of Havilah Colgain Wardle (standing next to Art in the purple shirt). Havilah is Joan Shepard's daughter and another one of the Ggrandchildren of Will and Bura Shepard.

Among the other family members pictured here are Rachel Shepard (bottom left) and Mary Shepard (top left). At the top right are Nathan and Cindy Shepard, Kerri and Mandi Aquiningoc, and Barbara Shepard.

Next Family Reunion? Speaking of Family Reunions, this is a good time to start thinking about a Shepard Family Reunion for next summer.  It will have been two years since our last one. One idea is to gather in Anacortes, Washington, where we last had a reunion in 1997. Other suggestions?
- - -
Steve
Posted by Steve Shepard at 2:25 PM