The measure of a woman's character
is not what she gets from her ancestors,
but what she leaves her descendants.
(author unknown)

Greetings to all of you from warm and sunny San Diego. Belated Anniversary wishes to Jeremy and Desiree Ortiz who have recently moved to Blue Springs, Missouri from the San Diego area. Last Wednesday Jeremy and Desiree celebrated 9 years of marriage.

Today is the 6th birthday of Emma Beverly Jean Wilk of Atchison, Kansas. She is the daughter of Shannon Wilk, and one of the GGgrandchildren of Will and Bura (Davis) Shepard. The first picture shows a smiling Emma at a recent birthday party of a family friend. 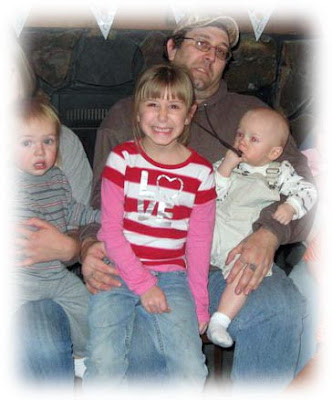 Shannon emailed me recently: "We are doing GREAT! Emma's last day of school was May 26th, and she was very excited. Until I told her she won't be going back until August. She was a bit upset. But she will be going to the daycare she went to since she was a year old. They do lots of fun stuff. Lots of field trips, and they get to go to the pool.

"I have been working tons! We are on mandatory over-time right now. I work at Fargo Assembly of PA. I build the wire harnesses for Harley Davidson. HD and John Deere are the biggest names we build for. I worked for them about 13 years ago, so when I went back I knew what I was getting into. It's not real hard work, but Harley is very strict on how they want the harnesses to look. The overtime is great on the checks but poor Emma has to get up at 5am so I can get her to day care.

"Other than all that we are well, waiting for all the storms to pass and get on with the hot summer weather! At work we are collecting a bunch of stuff to send down to Joplin. They were hit so bad. The one thing you just have to deal with here is the crazy weather. Take care. Smiles and Sunshine. ...Shannon and Emma."

Maggie's grandparents were originally from Fairfax, Virginia on the East Coast, but they migrated to Kentucky and then on to Spencer in Owen County, Indiana in the early 19th century. That's where Maggie was born and lived her whole life. Her offspring, in the early 20th century, migrated to the panhandle of Oklahoma and then on to Colorado and eventually San Diego on the West Coast. Emma's mom Shannon then "bounced back" to Atchison, Kansas, in the middle of the county, where Emma was born, and where they live today. (How's that for 250+ years of family history in a nutshell?)

Here then is a 10 generation lineage for Emma Wilk, tracing her family line back 266 years, through Margaret Frances Williams to William Williams of Fairfax, Virginia.
Happy Birthday to Emma! And best wishes to her and her mom Shannon.
- - -
Steve

Posted by Steve Shepard at 9:58 AM