Our greatest responsibility
is to be good ancestors.
~Jonas Salk

Greetings to all of you from our home in warm and sunny San Diego. This last month Cindy and I have been away visiting some terrific places, but as we all know, there is no place like home!

More Re: Our Recent Genealogical Trek. I mentioned in my last post that I have recently found information about GGgrandmother Mary Sprague Shepard, the wife of Civil War Soldier William Shepard. I have also recently discovered William's parents. Their names were James and Hannah Shepard.

James was born in Kirkwood, Ohio in 1813, while Hannah (maiden name unknown) was born in Thornton, Yorkshire, England about 1816. They met in Belmont County, Ohio, and were married there about 1834. Sometime around 1840, with their two children William and Elizabeth, they moved to Wayne, Indiana, northwest of Indianapolis. They went on to have 4 other children, all born in Indiana: John (in 1841), James (1843), Jasper (1851) and Sarah (1853). After moving just a few miles south to Coal Creek, Indiana, their first born William married Mary Sprague in 1860. 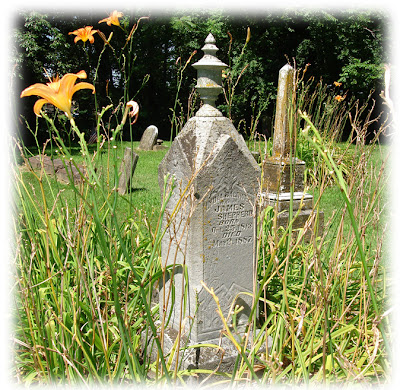 Young William and Mary then moved across the state to Wabash where William got a farming job making some good money. The Civil War started the next year, which took the life of William, a story I told in my last post. The widow Mary and her son William Elmer then returned to Montgomery County where her family and her in-laws James and Hannah still lived.

Most of the historical records indicate that James was an Indiana farmer most of his life, although a few of them say he was also a "wagon maker". Sometime in the early 1870s, GGGgrandma Hannah died. After moving some 50 miles to Carroll County, Indiana, James married for a second time, to a woman named Lydia Caldwell, with whom he spent the last 13 years of his life. 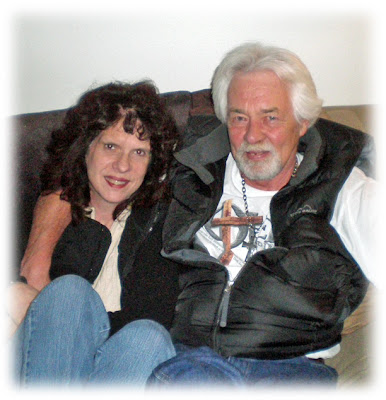 On our recent genealogical trek to Indiana, Cindy and I visited the grave of James Shepard, who is buried with his second wife Lydia in Paint Creek Cemetery outside the small town of Camden, Indiana. They rest beneath a 5' tall monument (see first picture) in the old section of this well kept country graveyard 2.5 miles east of town, alongside a peaceful tributary of Deek Creek. Thanks to Linda Thompson, a genealogist in Wabash, Indiana for finding GGGgranddad James Shepard's final resting place. Don't be confused by the misspelling of the last name on James' headstone. In the 19th century, it was common for our Shepard ancestors to have their name misspelled.

Happy Birthday Barbara! Today is the birthday of my sister Barbara Shepard Mackey of Anacortes, Washington. The second picture shows Barbara with her husband John Mackey. They were married in May in Anacortes, Washington, where they now live. Barbara works for Safeway in Anacortes while John enjoys the retired life, especially riding his Harley and flying. When not occupied with family concerns they spend time sharing meals, playing cribbage, watching TV and reading the Bible. John's recent health concerns has required a lot of Barbara's attention, but thanks to her, he is on the mend. 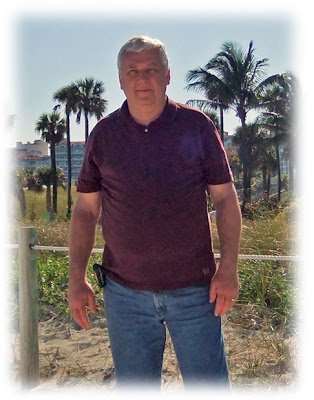 Kim wrote me recently: "Jeff just had his 35 year anniversary with Hallmark cards. He will spend his birthday week with our family here, and going to St Louis to the Gateway Arch, Six Flags and the zoo. Then we'll go to Lamberts for his birthday dinner and spend the rest of the week at the lake boating and fishing. He loves entertaining the family."

The countdown to our Shepard Family Reunion in Anacortes, Washington on August 13 continues. It will take place two weeks from Saturday!
- - -
Steve