And in a short while
the generations of living creatures
are changed and like runners
relay the torch of life.
~Roman poet Lucretius

Greetings to all of you from Italy! Cindy and I find ourselves in Rome on this weekend of America's July 4th holiday. We are here with our travel partners Jerry and Cathrina Clark of Lubbock, Texas. 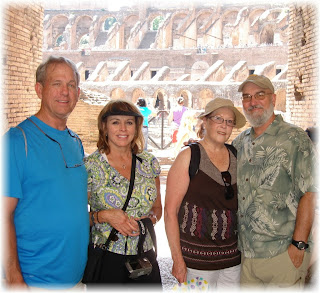 The first picture shows the four of us at the Rome Colosseum with the inner ruins of this marvel in the background.

Cathrina was actually born about 900 miles north of here in Dusseldorf, Germany, even though she has been in the U.S. most of her life.

I do not know of any Italian immigrants in our family's history. I say this even though Cindy's GGgrandfather was Julius Caesar. His full name was Julius Caesar Vedders, however, from 19th century Limestone, Alabama. Not the famous Roman dictator from the first century B.C.E.

The French Connection. I do know about an American ancestor who was originally from France, just west of here. His name was William Henry Pickens, and he was a 6th Ggrandfather of my mother Maida Gower Shepard.

William Pickens actually immigrated to the U.S. from Ireland, even though he was born in 1670 in La Rochelle, France, the child of Robert Pickens and Ester Jeanne Benoit Bonneau. William's family was part of the 17th century Protestant migration from France to Ireland. That is where he married his Irish bride Margaret Pike, with whom he had 8 Irish children.

William, Margaret and their kids crossed the Atlantic to settle in Bucks County, Pennsylvania around 1720. Over the following 3 centuries, William and Margaret's descendants migrated from Pennsylvania to South Carolina, then Tennessee, and then Mississippi, before moving on to Northern Arkansas, where my mother was born. Her part of the family then migrated to Oklahoma and then the west coast.

Below is the 340 year lineage from William Pickens to Nathaniel Sauvage (whose birthday is coming up next Thursday). 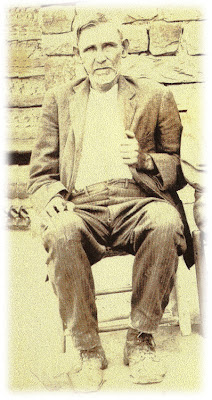 David Shannon (6th in this lineage) was so taken by his mother's Pickens family name that he gave his child the middle name "Pickens". That child, Samuel Pickens Shannon, is pictured above in a photo from the early 20th century.

I am grateful for all these generations who, as Lucretius said, "like runners relay the torch of life."