To have a child is to decide forever
to have your heart go walking around
outside your body.
~Elizabeth Stone

Greetings to all of you from Alameda, California, the home of our grandson Logan Alexander Shepard, whose first birthday is today! Logan is the son of Nathan and Chenda Shepard, the sister of Preslea, and the first grandson of Cindy and me. But he will not be the last. Logan's little brother is due to arrive this summer in July or August. And if you ask his mom Chenda, he can't come soon enough! 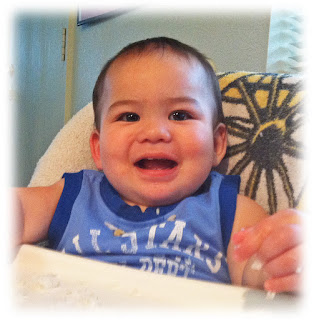 A GGGrand. Logan is the 11th of the 12 GGgrandchildren of Leroy and Nola Gower, and the 11th of the 13 GGgrandchildren of William and Bura Shepard. He also has the unique distinction of being the first GGgrandson of Will and Bura Shepard with the last name Shepard. But there will be others -- perhaps many others -- who will arrive in their time and will be able to pass on the Shepard name to future generations.

The following is a photo presentation to celebrate Logan's Birthday. (If the following does not play correctly, select this link.)

Another Alexander. Logan's middle name is the same as that of his 5th Great Grandfather Alexander Davis. I have not mentioned the name of Alexander Davis in this blog for a few months now. He is buried in Spencer, Indiana next to his daughter Elizabeth Davis Carter. Our larger family of Davises and Shepards collected funds last fall to get a new headstone for them. Their headstones were old and broken and badly in need of replacing. I just received a picture from cousin Jerry Davis showing that the new headstone is now in place. 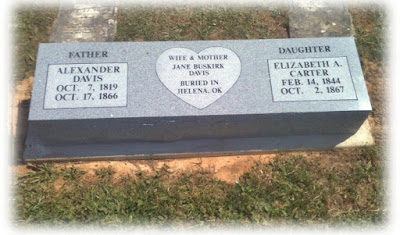 If you happen to be anywhere near Spencer, Indiana this summer be sure and visit the New Union Cemetery which is home to the graves of many Davis ancestors, in particular the graves of Alexander and his daughter Elizabeth Davis Carter. The New Union Cemetery is easy to locate. It is 5 miles northwest of Spencer at the corner of Rattlesnake Rd and McKay Rd. (also marked as Shepard Patrick Rd.)

Two other descendants of Will and Bura Davis Shepard will celebrate birthdays in the next couple of days: Jason Shepard and Darren Boyd. Jason is also a Ggrandson of Leroy and Nola Shannon Gower. 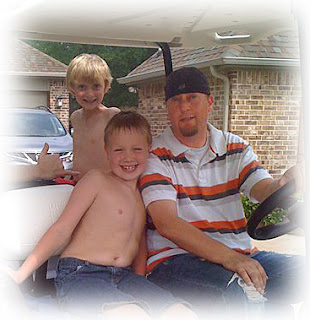 A GGrand. This Friday, May 18 is the birthday of my nephew Jason Shepard.  He was born and raised in San Diego but lives these days in Fort Worth, Texas where he works for Pepsico. Jason is the son of my brother Gary Shepard of Washington and Jackie Perry of Texas. The second picture shows Jason with his nephews Kyle and Nate Sauvage, children of Kelly and James Sauvage of Weatherford, Texas.

Darren: "Hi Steve. Things are good. Very busy. Courtney moved out; just Brando and Kori left. Just being a dad and working. Hope everyone is awesome." See a picture of Darren with his 3 kids in a blog post from last week.
- - -
Steve
Posted by Steve Shepard at 8:11 AM