Greetings to all of you wherever you may be, on this wonderful spring day in San Diego. 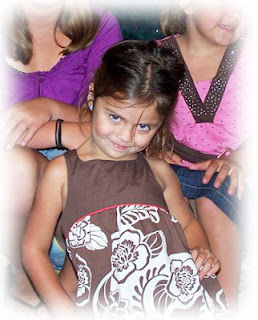 Nicole. Happy Birthday Nicole Shepard! Last week my nephew Patrick Shepard emailed me that his new bride Nicole Haw Shepard had a birthday May 11. Happy Birthday, Nicole, and welcome to our family! She and Patrick were married back in March.

Ashlyn. Today, May 19 is the 7th birthday of Ashlyn Ortiz, daughter of Jeremy and Desiree Ortiz of Blue Springs, Missouri. Ashlyn is an older sister of the twins Isaac and Dominic Ortiz who are the newest descendants of Will and Bura Shepard. The twins were born just last month. The latest word is that Mom Desiree and the little guys are doing much better.

The first picture shows Ashlyn Ortiz striking a pose in a picture that was taken last fall. Happy Birthday to Ashlyn!

Elmer. Tomorrow, May 20, is the birthday of Elmer Shepard who was the oldest member of the Will and Bura Davis Shepard clan when he passed away earlier this year in Oklahoma. Sunday he would have been 94 years old. His son Dane lives in New Castle, Oklahoma and his daughter Joan lives in Dixon, California.

Two weeks ago I posted a picture of Elmer that was taken in Colorado in the late 1930s, back in the days when he worked as a farm hand in Two Buttes, Colorado. Elmer's sister Thelma Shepard Boyd wrote me shortly thereafter to tell me that she remembered seeing that picture years ago, and that in it Elmer is holding a snake. Elmer's son Dane tells me that he thinks it is a fish in his dad's hand but he can't be positive. 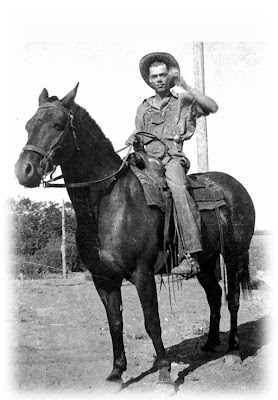 I am including the picture again today for you to see it. Clearly it is Elmer on a horse, in work clothes. It appears that it may have been taken on the farm where he worked just outside of Two Buttes. Those were difficult days, and at the time he may have been the only gainfully employed person in his immediate family. If you look closely enough you can see a snake in his left hand, or at least something that looks like it might be a snake. Or is that a fish? What does it look like to you?

As a young buck of 22 or 23 years old, Elmer is striking quite an impressive pose: on a healthy steed, confident in demeanor, dressed in the rugged garb of a working man. If you let your imagination go for just a minute, to also be holding a defeated creature gives him the appearance of a kind of conquering hero.

Okay, maybe I am overstating things a bit. Nevertheless it makes for a good family story, one that deserves to be told and retold. And maybe even embellished as the years go by! I think Grandad would like that.
- - -
Steve

Posted by Steve Shepard at 9:04 AM