If nothing is going well,
call your grandmother.
-Italian proverb

Greetings to all of you from Anacortes, Washington where Cindy and I are visiting my mom and family. This week is the wedding anniversary of two important couples in our Gower family history.

91 years ago, on September 29, 1921, my grand parents Leroy Gower and Nola Shannon Gower, were married in Mountain View, Arkansas. She was just 18 and the youngest of a family of 9 children; he was 21 and the 3rd of a family of 7 children. At the time both their families lived in the small farming community of New Nata, in Stone County, Arkansas, about 10 miles west of Mountain View. 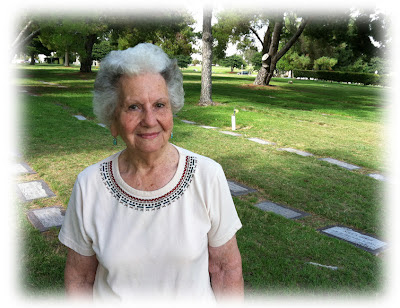 Their families had lived in the Northern Arkansas area for a couple of gene- rations, so it was something of an adventurous move when, as a young couple with two young children, they moved 300 miles west to Okemah, Oklahoma. My mother Maida (1 year old) and her brother Hendrix (3 years old) were the babies who made the move in 1925.

Okemah is where this young family lived for 17 years, struggling in near poverty. Finally in 1942, now with a 3rd child Melva (Vicki), they made their way to San Diego, where Leroy and Nola settled for most of the rest of their lives.

The first picture, taken last month, shows my mother Maida Gower Shepard at Greenwood Memorial Cemetery in San Diego. Behind her are the graves of almost a dozen family members, including the graves of Leroy Gower and Nola Shannon Gower. The second picture is another view of their two graves.

The anni- versary of my grand parents Leroy and Nola Gower is just 4 days after the anniversary of Leroy's parents, George Gower and Serena Elizabeth Turner. On September 25, 1893 (115 years ago this week) they were married, also in Stone County, Arkansas where they both were born and raised. At the time of their marriage she was just 16, and he was 20.

As we remember the anniversaries of these Gower couples, we are also reminded of their lives and their challenges, but also the wonderful memories we have of them, especially the two that many of us remember as Grandpa and Grandma Gower.
- - -
Steve
Posted by Steve Shepard at 6:17 PM