Family and friends are what make us
who we are today,
and without them
we would never be complete.

Greetings to all of you from Dorrington in Northern California where Cindy and I have been enjoying a post-holiday weekend with family from all over the west coast -- San Diego, San Francisco, and Western Washington. The first picture shows the 11 of us who spent this past snowy weekend together. 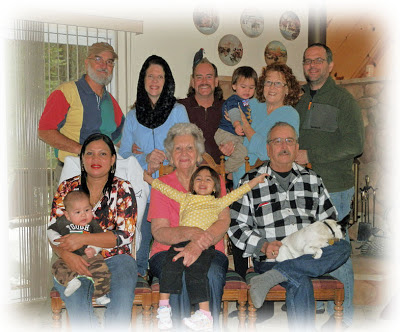 From left to right in the picture above, on the back row are me, my sister Barbara, brother Russ, grandson Logan, wife Cindy and son Nate Shepard; in front are grandson William, daughter-in-law Chenda, mother Maida, granddaughter Preslea, and brother Gary Shepard (with his companion Dexter). Nathan, Chenda and their children live in Alameda, California; Maida and her children Barb, Russ and Gary live in Western Washington. 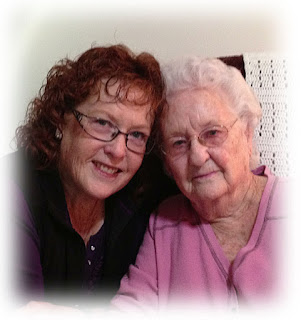 Happy birthday today to my wife Cindy Harris Shepard, who appears in the upper right of the picture above. She was born in the San Joaquin Valley in Visalia, California but was raised in San Diego. After being away for many years she and I live in San Diego once again. The second picture shows Cindy with her mom Paula Harris in a picture that was taken at Christmas at Paula's San Diego home on Burgundy Street.

Congratulations to Darren Boyd, who became a grandfather recently. His daughter Courtney gave birth in San Diego on Saturday to a beautiful baby girl named Carsyn. She is the newest of the 15 GGgrandchildren of Will and Bura Davis Shepard. Best wishes to Courtney and the entire family, including Ggrandparents Terry and Thelma Shepard Boyd! 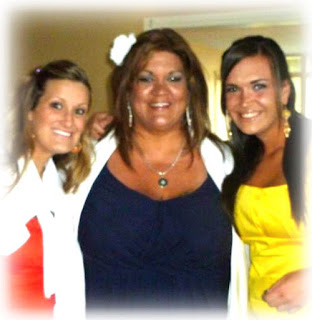 This Thursday, Jan 10, is the birthday of Mary Medina Shepard the wife of my brother Darrell who lives in Kirkland, Washington. They are the parents of Christopher, Rachel and Patrick and are set to become grandparents for this first time this summer.

The third picture shows Mary in the center with her daughter Rachel on the right, and Chris' girl friend Jessica on the left. Best wishes and happy birthday to Mary!

Are there plans yet for family reunions in 2013? If you know of any plans I would appreciate hearing about it and passing the word in this blog.
- - -
Steve Shepard
Posted by Steve Shepard at 2:08 PM

Anonymous said...
This comment has been removed by a blog administrator.
10:47 PM

Anonymous said...
This comment has been removed by a blog administrator.
1:49 AM

Anonymous said...
This comment has been removed by a blog administrator.
6:44 AM