Blood cannot be denied,
and perhaps that’s why we fight tooth and claw,
because we cannot -- being only human --
put asunder what God has joined together.”
~Whitney Otto 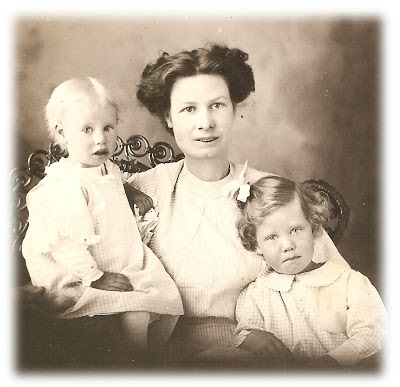 Sadie Shepard Pruett (1892 - 1980). On this date in 1892 Sadie Shepard was born, the sister and only sibling of my grand father William Shepard. Like her brother, she was born in Alton, Illinois, a small Mississippi river town near Saint Louis, Missouri. When just a child, her family moved from Illinois to Beaver County, in the panhandle of Oklahoma. There Sadie married Levy Pruett, raised their family of three girls, and lived the rest of her life. She and husband Levy are buried in Sophia Cemetery in Beaver County.

The first picture shows Sadie with the first two of their three daughters, Gayle and Alberta. This picture looks to have been taken in Beaver County, Oklahoma at the wedding of her brother William Shepard to Bura Davis in 1915, when Sadie was 23 and her daughters were just 2 and 4 years old. 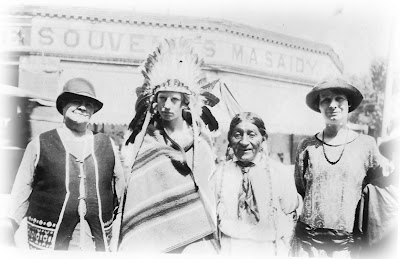 The second picture shows daughters Gayle and Alberta Pruett around 1930 when they made a stop somewhere in the American Southwest to have their picture taken with some native Americans. Posing with tourists to make a dollar or two didn't do much for the image of native Americans, but it was a very common activity in early 20th century America. (Thanks to my cousin Dane Shepard for sending me this amusing picture.)

Sadie's brother William Shepard moved his family to California in 1940. Sadie would sometimes visit her brother and family in San Diego, just as William and his family were fond of returning to Oklahoma for visits in the 1940s and 1950s. I have a couple of old pictures that were taken during those visits and have included them in previous blog posts here and here. 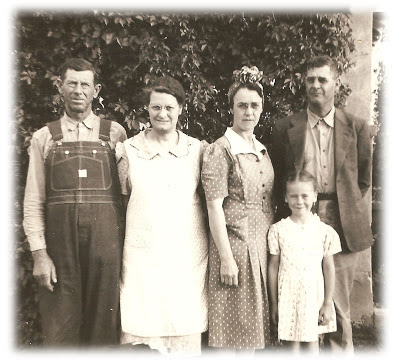 The third picture, taken in June, 1942, shows my grand parents Bura and William Shepard on the right when they returned from San Diego to Oklahoma to visit Sadie and her husband Levy. In the lower right is Thelma Shepard Boyd, William and Bura's youngest child, who was 6 years old at the time.

An Historic Court Case. While searching the internet recently I found a fascinating reference to Sadie and her brother William Shepard in an historic Oklahoma court case. After Sadie and William's father died in 1915, their mother Elvira Owens Shepard married a man named Cal Williams. After Elvira died in 1931 a question arose over who should inherit Elvira's estate, her children or her 2nd husband.

My father, Elvira's grandson, was an impressionable 15 year old when this case was settled. I remember him telling me years later about some disagreement over his grandmother's property that led to some hard feelings that lingered for many decades. But I never knew until this week that it was an actual court case that was heard by the Oklahoma Supreme Court and was settled in 1937.

The summary of this case is interesting to me because it includes the will of my great grandfather William Elmer Shepard (Sadie and William's father) who died in 1915. Among the stipulations in his will, he leaves his farm machinery to his son William, and two steer calves to his daughter Sadie.

What was really in question, however, was the property that Elvira had owned, and who should inherit it. It was eventually decided that her 2nd husband should get it, and not her children Sadie and William. You can read details of this interesting and historic court case here.
- - -
Steve
Posted by Steve Shepard at 6:17 PM

Anonymous said...
This comment has been removed by a blog administrator.
1:13 AM

Anonymous said...
This comment has been removed by a blog administrator.
1:11 PM