History cannot give us a program for the future,
but it can give us a fuller understanding of ourselves
and of our common humanity
so that we can better face the future.
~Robert Penn Warren

Greetings to all of you from the mountains of Northern California where Cindy and I are spending a few days enjoying the brisk mountain air in this beautiful Sierra setting. 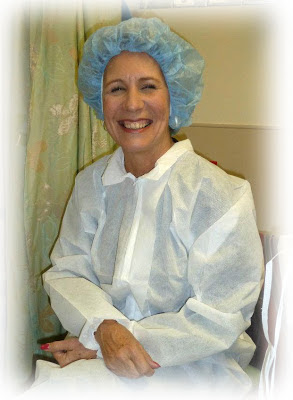 Happy Birthday Paula. Today is the birthday of my cousin Paula Tuzzolino, daughter of Vicki Gower Johnston. She is one of the 12 grandchildren of Leroy and Nola Shannon Gower. Paula is originally from San Diego, but lives today with husband Frank in Sun Lakes, Arizona.

I talked to Paula yesterday and she tells me that she is doing well, enjoying retirement and keeping busy with various church and community activities. Most of the time she and Frank are in Arizona but they return to Washington for part of each summer, where they have family.

Paula is the mother of Heather Robson Cotten, and the proud grandmother of Tori and Lexi Cotten, who live in San Antonio, Texas. The first picture shows Paula when she visited the hospital for the birth of her granddaughter Lexi, sporting sterile hospital garb.

A 1920 Picture Revisited. Last week I posted a 1920 picture of my Shepard grandparents in front of some farm machinery. I tried my best to describe the picture and the people in it. Since then, however, while searching the internet, I found some more specific information about that picture and the people. Interestingly it was information from a blog post I wrote 5 years ago! (Is that scary or what?) 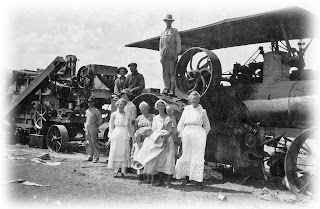 I mentioned in The Shepard's Crook in September, 2008 that I had received this picture from my cousin Dane Shepard of Newcastle, Oklahoma. Back in 2008 Dane had talked to his dad Elmer (who passed away just last year) who had related to him the following details of this picture (I am including the picture again here; click on it for a larger view):

"It was taken in July of 1920 and features a threshing rig hooked up to a steam tractor/engine owned by Grandad (William Shepard). He (Grandad) is standing above the rest. The two men to his right are Lawrence Davis (left) and Jess Davis (right). On the ground (right to left) are Mrs. Erickson (a Swede from Illinois), Gram (Bura) holding Elmer, Gayle Pruett (girl's head), Pauline next to her, Elvira, an unknown woman, Tillie Erickson in back, and an unknown man."

What I did not realize back in 2008 was that the farm machinery in the picture had been bequeathed to our grandfather William Shepard by his father William Elmer Shepard. It was part of William Elmer's will that I only became aware of in recent weeks. 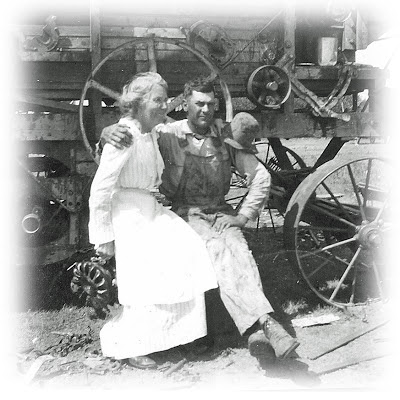 Also of interest to me is the woman on the left in the picture above. When Dane's father Elmer described the picture above he was unable to identify her. I have another picture in which she appears that was taken at the same time and shows her sitting next to grandad with his arm around her.

Who was she? Grandad's mother Elvira had a few sisters but none of them were either alive in 1920, or would have been the age of the woman in the picture. It is evident from the picture that grandad and she were quite familiar with each other.  Grandad was one who enjoyed a good laugh, and probably relished the humor of this picture. Whether Gram did is another question altogether.
- - -
Steve
Posted by Steve Shepard at 9:52 PM