Hold to the now, the here,
through which all future
plunges to the past.
~James Joyce
Hello Family and Friends,

Family Reunion This Summer. Plans are being made for a family reunion this summer in Anacortes, Washington on Saturday, August 10. All Shepard, Davis and Gower family members, friends and relatives are invited to attend. More specifics will be provided here as the date draws near. 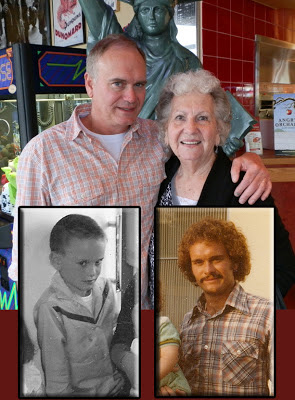 Happy Birthday Darrell. Tomorrow is the birthday of my brother Darrell Shepard of Kirkland, Washington. Darrell was born here in San Diego back in 1954, the 6th grandchild of Will and Bura Davis Shepard, and the 8th grandchild of Leroy and Nola Shannon Gower. Today Darrell and his wife Mary Medina Shepard live in the Seattle area and are the proud parents of three. This summer they will be grandparents for the first time.

Darrell: "So here it is again. That time of year. Steve wanting to announce to the whole world and reminding me that I am yet another year older and that much closer to death. Thank you Steve for this wonderful service you provide for us.

"It's like Woody Allen said: The thought of death doesn't bother me. I just don't want to be there when it happens. All kidding aside, I have finally abandoned my neurosis regarding aging. You can't fight it. And it beats the alternative. So please feel free to announce to the world my age. Go ahead. I really don't mind. Just don't expect me to utter that number. Actually I have found the fountain of youth. It's name is music. Whether I am playing alone or performing in a room of 200 people, I am always 17 again when I play the guitar. Sheer magic!"

The first picture shows Darrell and his mother Maida Gower Shepard in a picture that was taken last spring. Inset are two other pictures of Darrell, the one on the left from 1962, the one on the right from 1978.

Valentines of a Unique Sort. Before this month of Valentines Day is over I want to share with you about some ancestors who were Valentines of a unique sort. Abel Gower and Rachel Lay were teenagers who fell in love and sought to get married in Roane County, Tennessee almost 200 years ago. The custom was for a young couple to join in a "marriage bond" when they got engaged. Each family was required to promise a certain amount of money to show good faith, as a promise that the bride and groom were both eligible for marriage.

One of the oldest family documents of any sort that I have, is a copy of the marriage bond between my GGGG grandparents Abel Gower and Rachel Lay who were only 16 at the time of their engagement. Rachel's father James Lay, and Abel Gower himself, signed the marriage bond for $1,200 on February 20, 1816. If for any reason either one of them could not legally or morally get married, they would forfeit the money, no small amount for that time. $1,200 was the average ANNUAL salary in the early 1800s. 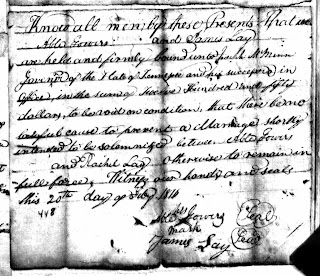 This second image is a copy of this marriage bond from 1816, and is available online thanks to 4th cousin Jean Gowers Loveall, with whom I have recently connected online. This 197 year old document is very difficult to read, so here is what it says:

"Know all men by these presents, that Abel Gower and James Lay are held and firmly bound unto Joseph McMinn, Governor of the State of Tennessee and his successors in office, in the sum of Twelve Hundred and fifty dollars, to be void on condition that there be no lawful cause to prevent a marriage shortly intended to be solemnized between Abel Gower and Rachel Lay otherwise to remain in full force. Witness our hands and seals this 20th day of February, 1816."

The document is then signed by Abel Gower and Rachel's father James Lay, and their seals affixed. Note that young Abel's mark was just an X, indicating he was not able to write.

On February 21, 1816, the day after the marriage bond was executed, Abel and Rachel were married in Roane County, Tennessee. They lived together for 44 years, raising 9 children in Tennessee. After moving to Mississippi and then Izard County, Arkansas, they lived their last days in Comanche, Texas where Rachel died in 1860. Abel died there 10 years later.

One of their grandchildren was Leroy Gower (1854-1909) who, along with his wife Ellen Taylor Gower, were among the first Gowers in Stone County, Arkansas. Read more about them and see their picture here. This Leroy Gower was the grandfather of my grandfather Leroy Ertin Gower (1899-1974), who many of us remember.
- - -
Steve
Posted by Steve Shepard at 8:32 AM