If we lose love and self-respect for each other,
this is how we finally die.
~Maya Angelou 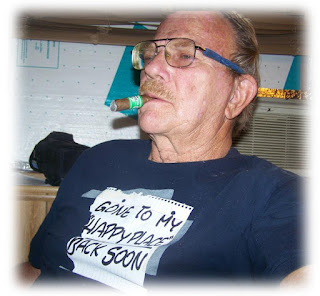 Hershell's Birthday. 70 years ago today my cousin Hershell Orley Gower was born here in San Diego to Hendrix and Starlene Bass Gower. Hershell is the oldest grandchild of my grandparents Leroy and Nola Shannon Gower. He was born the year after the Gowers arrived in San Diego and is therefore the first of all the Gower descendants to be born in California. Hershell's arrival began a steady stream of births of Gower grandchildren: 12 over the next 19 years.

Hershell and his wife Shelly live today in Bullhead City, Arizona. The first picture which was taken last year shows my cousin Hershell relaxing and enjoying himself in his happy place. Happy Birthday Hershell! 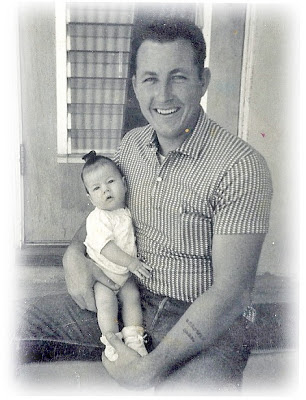 Happy Birthday Terry. Tomorrow is the birthday of my uncle Terry Boyd of Blue Springs, Mo. Terry and his wife Thelma Shepard Boyd moved from Gallup, New Mexico to Missouri last summer and seem to be doing well living close to their daughter Kim Boyd Clark and her family.

The second picture shows Kim and her smiling father Terry back in 1962 when Kim was less than a year old. The third picture shows Terry and Thelma last summer when in Oklahoma on their way from New Mexico to Missouri. Thanks to Dane Shepard for this picture.

Kim: "My dad is doing okay on chemotherapy. It makes him sick for the day and a little more tired than normal. He is in good spirits and likes company and enjoys swimming at the YMCA several days a week. He likes going out to dinner. He has been eating steak and lobster since he has people to eat with. My mom just eats soup. For his birthday dinner he will probably pick Longhorn Steak House and Desiree will make him German Chocolate Cake, his favorite. My mom and dad are very happy in Missouri. They are so amazed about how friendly people are here. They live about 10 minutes from us. 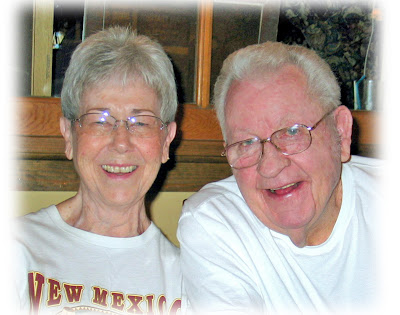 "The twins at 10 months old are doing better and are getting around more and more. Isaac can get around all over the down stairs. He's under your feet before you know it. Dominic moves backwards so he never gets very far. I'm sure it won't be too long until they will be pretty mobile. Damian is enjoying school and he is playing basketball. Ciara and Ashlyn both are doing well in school and are getting ready to play soccer very soon. Jeremy will be Ashlyn's soccer team coach."

Speaking of grandchildren: Congratulations to Jerry and Cathrina Clark on the birth of another grandchild, Georgia, who was born in Amarillo. This is #4 for Cathrina to go along with Jerry's 6, making a total of 10 together. As Jerry says, "We are prolific!"
- - -
Steve