No one's family is normal.
Normalcy is a lie invented by advertising agencies
to make the rest of us feel inferior.
~Claire LaZebnik

After my last post, I decided that an overview of our Gower ancestry would be in order. Fortunately we have a pretty clear picture of the Gowers from whom Grandpa Leroy Gower was descended, going all the way back to the first arrival of the Gowers in this country in the 17th century.

Happy Birthday Kerri. First, however, I need to say Happy Birthday to one of Grandpa Gower's Ggrandchildren, Kerri Shepard Aquiningoc. She was born on this day in 1968 while her parents were on something of an extended visit to Michigan. They were there for little more than a year, when Kerri was born. My guess is that their new baby made them so homesick for California they decided to return to San Diego, which is where Kerri was raised from the age of about 3 months. 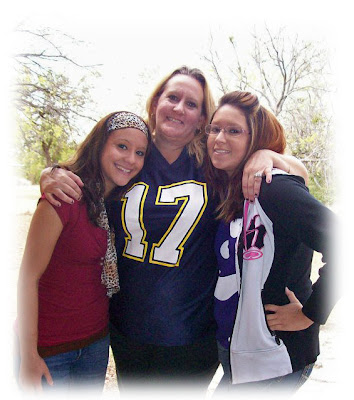 Today Kerri lives in Weatherford, Texas, not far from  Lyndsey and Mandi, her two daughters (see first picture). Mandi will present Kerri with her first grandchild this June when Mandi and her boyfriend Stephen will welcome the arrival of a baby girl. That new baby will be the first GGG grandchild of Leroy and Nola Shannon Gower (and the first GGG grandchild of Will and Bura Davis Shepard). And will make my brother Gary a Great grandpa!

Mandi: My mom is excited to be a grandma and everyone else is excited for me too. She'll be born June 19, exactly a month before my dad's birthday:) I thought that was kind of cool:) Her full name is Kambree Kay Bowman:) I'm doing great as well. Me and my boyfriend Stephen have our own place in Mineral Wells so we've been pretty busy the past couple weeks. I'm still working at Panda Express and I love it. I miss and love all you guys!!

The Gower Big Picture. Our Gower family line is actually quite impressive. Information is available that shows Grandpa Gower's paternal family line originating with Irish immigrant Abell Gower who came to America from Boulton, County Gloucester, England sometime before 1640. That is the year his son, also named Abell Gower, was born in Henrico, Virginia.

The graphic below (click on it for a larger view) shows the migration pattern for 10 generations of our Gower ancestors between 1640 and 1942. It begins in Henrico, Virginia (near Richmond) on the East Coast, and culminates in San Diego on the West Coast where Leroy and Nola Gower settled in 1942 and lived almost all the rest of their lives.

It took about 300 years for our Gower ancestors to get from Henrico, Virginia, where they arrived from England, to San Diego, where they completed their migration across the country. Like countless other families, they were driven westward, slowly at first and then jumping the final half of the country to the West Coast in the middle of the 20th century, when travel was much easier. The first half of their migration across country was by foot, on horseback, or in a horse-drawn wagon.

Since 1942 Leroy and Nola Gower's descendants have scattered, and today live primarily in Southern California/Arizona (where their son Hank Gower's family lives) or in Northwest Washington (where their 2 daughters Maida Gower Shepard and Vicki Gower Johnston now live). Other Gower descendants live elsewhere in California, Texas, Tennessee and Indiana.
- - -
Steve
Posted by Steve Shepard at 8:02 AM