There is something frightful
in the way in which characteristic qualities
are repeated from generation to generation.
~Oliver Wendell Holmes

This coming Sunday is Saint Patrick's Day, a day to celebrate all things Irish. As I mentioned in my last post, I plan to mention at least one Irish immigrant from our family tree in each blog post I send out this month. As with most American families we can trace our roots to a number of Irish immigrants -- I count 12 so far! And there is still more research to be done.

Irish Immigrants William and Polly Gray. Another of the relatively recent Irish immigrants in our family tree are William Gray (1771-1865) and his wife Polly, who came to America from County Antrim, (Northern) Ireland sometime around 1800. Interestingly the immigrant I mentioned in my last post, James Spear, also came from (Northern) Ireland, but from County Armaugh. Though they lived only a few wee kilometers from each other in their homeland, there is no indication they ever knew one another. 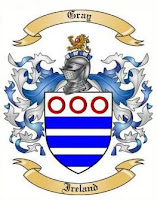 I have parentheses around (Northern) Ireland because when these two immigrants left their homeland, the island of Ireland was a united country. Today Northern Ireland is part of the United Kingdom, while the rest of Ireland is a separate nation.

Where our ancestors landed when they arrived in America made all the difference. William and Polly Gray appear to have arrived in the southern state of South Carolina, which is where they settled. James Spear probably arrived in a Northern port because we know he settled in Pennsylvania. While James Spear's descendants can be traced across the Northern part of the U.S., William and Polly Gray's descendants can be traced across the South, from South Carolina to Mississippi to Louisiana to Stone County, Arkansas (where my mother and both my Gower grandparents were born). Descendants of these Gray and Spear immigrants then found their way to Oklahoma in the the early years of the 20th century, and finally made their way to San Diego in the 1940s.

One of the granddaughters of William and Polly Gray was Peggy Ann Gray, whose husband David Reid Shannon died in the Civil War fighting for the South. One of Peggy and David's sons was Samuel Pickens Shannon, the father of my grandmother Nola Shannon Gower.

Here is my lineage from Irish immigrants William and Polly, including the one who, today, is their youngest descendant: 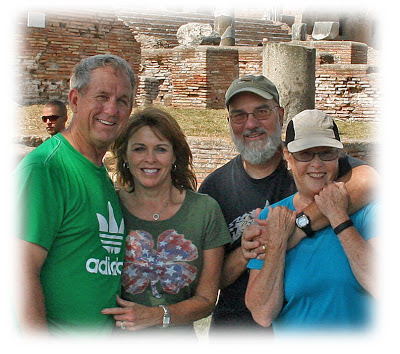 Happy Texas Birthday! Today is the birthday of Jerry Clark of Lubbock, Texas. He has lived there ever since he was in college at Lubbock Christian University, which is where he met and then married my sister Linda Shepard back in 1970. Linda died just a year later, but we have claimed Jerry as a member of our family ever since, whether he wanted us or not! ;-)

The second picture is from the summer of 2011 and shows Jerry and Cathrina on the left in Irish green (is that a star spangled shamrock?), and Cindy and me on the right.

Today Jerry and his wife Cathrina enjoy the good life in their happy home in south Lubbock, and are the proud grandparents of 10 grandkids, who are spread out over West Texas.

Jerry: All is good on the Texas front. I just had a knee procedure to clear up some aging issues but it is spring break and I will be back at full power soon. Cat and I are really enjoying our church and the life group that meets at our house weekly. In addition to travel, grandkids and Ranger (the household German Shepherd) we keep quite busy. We will make a big trip to cruise the Danube this summer from Budapest to Germany. We are loaded and ready to conquer Europe again! Best to all and love. Hope to make it up to Anacortes in August.

Speaking of Family Reunion... Now is the time to put the Family Reunion in Anacortes, Washington on your calendar: Saturday, August 10, 2013. Here's hoping you will make plans to be there, wherever you may be coming from! More details will be forthcoming.
- - -
Steve Shepard
Posted by Steve Shepard at 11:05 AM