Our Lord has written
the promise of the resurrection,
not in books alone,
but in every leaf in spring-time.
~Martin Luther

Greetings to all of you and Happy Easter on this beautiful spring day! 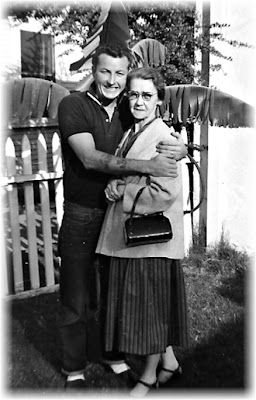 Terry Boyd. On this day of resurrection it is appropriate that we remember my uncle Terry R. Boyd (1937-2013), of Blue Springs, Missouri who passed away last Monday. Terry had been a member of our family ever since he married Thelma Shepard in San Diego back in the summer of 1958. Born in Tucson, Arizona, Terry lived for many years in San Diego where his and Thelma's two children Kim and Darren were born. Much of his life was spent in Gallup, New Mexico until he and Thelma moved to Blue Springs, Missouri last summer.

His daughter Kim Boyd Clark informed me that Terry had requested no funeral. But there will be a grave side service April 6 at 2 pm at del Angel South Lawn Cemetery, in Tucson, Arizona, when he is laid to rest near his mother Loraine Hopkins Boyd.
The first picture is one of my favorites of Terry and is from December, 1958. It shows Terry with Bura Davis Shepard, who had become his mother-in-law just a few months earlier. Among other things this playful picture reminds me that Terry had a great sense of (sometimes irreverent) humor, which I always found to be a good balance (some would say irritant!) to the midwestern stoicism in our Shepard/Davis DNA. God bless the memory of Terry and the family he leaves behind.

Happy Birthday today to my cousin Joan Shepard of Dixon, California, one of the 12 grandchildren of Will and Bura Davis Shepard. She is the daughter of the late Elmer and Beryl Shepard and the mother of Havilah Wardle of Victoria, Texas. (See picture of Joan and Havilah in Hawaii back in January.) 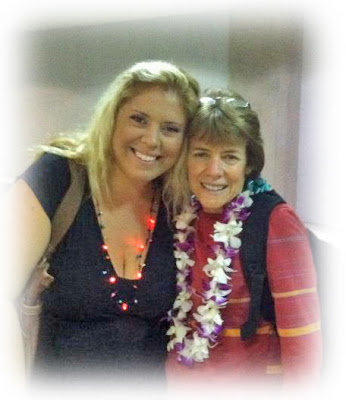 Joan: Visiting with Havilah and Kevin in Oahu was the highlight of my year. They were exceptionally generous with me, teaching me the basics of scuba diving--at least enough to keep me from hurting myself! In such a few days, I experienced Earth in ways that had seemed impossible before. Being with them was a true joy and I look forward to visiting Victoria soon. Returning to Texas should feel like going home. Who knows what adventures await us all!
From the (e)Mail Box. I received an email from my nephew Patrick Shepard who said that the baby he and Nicole will be having this summer will be a boy, not a girl (as I erroneously reported in my last post). Patrick also mentioned that he was interviewed on a local Seattle TV station this past week regarding the work he does in caring for the aging. He shared with me this link where the interview can be viewed online. Way to go, Pat! You do our family proud.
Shannon Irish Ancestors. As I continue my description of the Irish ancestors in our family tree, I need to mention Thomas and Agnes (Eigness) Shannon. These two came to our shores around 1700 with Thomas' 3 brothers William, Robert and Andrew. We know more about Thomas and Agnes' family than any other Irish immigrants we can claim, thanks to the 1990 book "Shannon" by the late Dexal Shannon, which I have mentioned before in this blog. 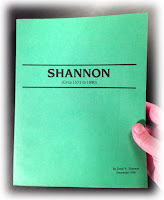 The book catalogues hundreds of American descendants of Thomas and Agnes but has very little information about our Shannon history in Ireland. What the book does say is that Thomas Shannon's great grandfather, John Shannon, was from Scotland and immigrated to Ireland in 1602, just about a century before Thomas and Agnes crossed the Atlantic to the new world. Dexal Shannon also tells us that Thomas and family came from Munster, a province in the south of Ireland, and settled in Lancaster County, Pennsylvania. Unfortunately, where in the province of Munster they originated is unknown.
Select this link to read the first few pages of the Shannon book, which includes some very interesting information about the early years of our Shannon ancestors in America, including the 1737 will of Thomas Shannon.
Thomas and Agnes are two more in our pantheon of Irish ancestors. My grandmother Nola Agnes Shannon Gower, was the GGGG granddaughter of Thomas and Agnes Shannon.
- - -
Steve Shepard
Posted by Steve Shepard at 8:04 AM